MEAL PREP, BEFORE AND AFTER • 6 min

MEAL PREP, BEFORE AND AFTER • 6 min

Robert was the Fall 2020, TrifectaME 90 Day Transformation Challenge winner. After his phenomenal transformation, we sat down with him to find out what inspired him to make changes to his life. His story is one that many of us can relate to filled with disappointment, grit, and excitement.

Learn about how Robert went from 315lbs to almost his lowest weight since his mid-twenties.

Just a guy from Pittsburgh

I'm originally from Miami, Florida. My family moved to Pittsburgh in 2009 due to work. I worked at a television station and became an account executive. We’ve been here ever since. We like that Pittsburgh is a big city with that small town feel to it; and  the people are amazing.

I have always worked out. In my 20s, I did bodybuilding and competed in a few local shows. But since then, life happened and I was just busy.

When we first moved here, I was the only one working. My wife, very nicely gave up her job and career to move up here with me. Our boys were about 8 and Jessica was 11 or 12 at the time. There were a lot of people I was responsible for at the time. As a family, we made it work but it was a big change to my life.

Life comes at you fast

When I was bodybuilding, I was 215 pounds and all of a sudden I wasn’t. I was getting ready to attend an event for work when I went to put on my jeans and they felt tight. I looked at the waist they were a size 46.

I went from 315lbs to 278lbs in a few months. I was proud of my progress but then I was stuck there for a while.

If you're trying to lose weight then your body is going to fight you on it -- especially as you get older.

Shortly after I started losing weight, I had a health scare that hospitalized me.

My family tree is pretty healthy. Previously, I haven't had anything other than the typical cold. I just didn't get sick until we went on a road trip a couple of years ago.

We made a pit stop to grab some fast food where we all ordered burgers. I went back and ask for lettuce, tomato, and onions for my burger. I was the only one in my family that added veggies to their burger. I ended up getting extremely ill afterward due to eating dirty produce.

I developed an ulcer due to H. pylori (Helicobacter pylori) and didn't know. I assumed it was simply food poisoning so I didn’t go to the doctor.

Once I finally went to the doctor, they explained to me that your hemoglobin needs to be within a certain range. I think 14 to 17 to maintain normal. bodily functions. When they looked at my hemoglobin, I was at a 7.

Basically, my body was shutting down.

This opened my eyes. I essentially got sick simply from bad food. I decided right then that I was fully committing to losing weight. I already didn't want to go to the bigger pant size but I also knew that at some point, I’d be sick again.

But I figured if I was as healthy as possible and I had a healthier immune system, then I would be able to better fight off another illness.

I went back to kind of what I knew from my bodybuilding days. At first, I started with only eating multiple times a day not just when I felt hungry. This was a big change for me as I was just eating when I wanted before.

Then, I focused on when I was drinking alcohol. Was it with friends, on the weekends, or when I went to games? I eliminated those empty calories. After this, I started doing cardio which was interesting compared to being active on my lighter days.

At 315lbs, I was doing the elliptical because it was easiest on my knees. I was struggling to do five minutes and my knees hurt! I reminded myself to take it step-by-step and do it a little bit at a time.

Over time and these small steps, I was able to get down to 242lbs. But I wanted to push myself a little more. I wanted to see if I still had it in me to get below where I was before and improve my conditioning.

Discouraged and unsure what to do next

At 242 I looked bigger, but I didn’t appear to be obese in a suit. But I knew it’s not where I wanted to be.

I saw the TrifectaME 90 Day Challenge and thought it would be a really good opportunity for me to see if I still had it in me.

I started eating a strict diet and incorporating the Trifecta Cod...which was amazing. The first time I tried it and I loved it. The fact that I didn’t have to touch the raw fish and it tasted good made dieting so much easier. 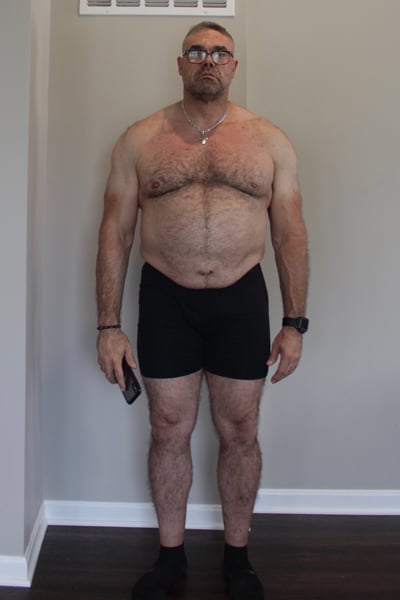 I was very discouraged in the beginning. Like many others, I started to think that the little weight I wanted to lose, was never going to come off.

It’s hard because you don’t really see changes on yourself; as time goes by you get frustrated.

There were many times when the voice in my head said, ‘you know what, you're gonna be 52 you’re good. You already went from 315 to 240. You’re fine.’ But being part of the Trifecta community helped. It was very motivating to see other people’s stories, so I kept with it. I made myself a promise that I was going to stick with the Challenge for at least 10 weeks and see where I’m at then.

I really started buckling down. I became more diligent on my diet and exercise. In the seventh week is when I visibly noticed changes. Once you get rolling and you start seeing results, then it becomes easy. You’re very motivated at that point.

I was like a lot of people and thought, "more is better" when it came to working out. Initially, I was doing about 40 minutes of cardio, five times a week. But I noticed my body wasn’t responding like it was when I was 25.

Mentally, I knew I could push and keep going but my body wasn’t responding. This could easily cause a negative effect so at almost 52 years old, I had to learn how to listen to my body.

Working out became a form of therapy for me. When I was tired, I’d take a rest day. This also helped me realize how important consistency was in not just working out, but also with my diet.

The biggest change I made during the challenge was what I was eating. The food from Trifecta was so clean that it helped me start to lose weight so I stuck to it.

It was not that hard because Trifecta eliminated all the guesswork. It removed years of all the nutrition relearning that I was doing on my own. It helped me get to where I wanted within a matter of 90 days, which is still pretty astonishing to me.

Find out what Trifecta meal plan can help you achieve your weight loss goals using the quiz below:

The food tasted great, which made it so much easier. Now, if I had been eating canned tuna, with white rice every day, we’d be having a different conversation. But because of the food and all the support, it helped keep me going.

I'm just amazed that how our human bodies are so resilient and can adapt to change. If you look at my before and after, you’ll see that there was a huge change. If I can do it, then so can you.

This really taught me that consistency is definitely key. The food and the diet are 90% of the equation because I was always working out.

I only wanted to change it because I didn't want to wear a larger pants size. However, the reality was that I'm sure that a lot of the health conditions would have happened if I didn’t change my lifestyle. I’m very thankful that I started this journey when I did. 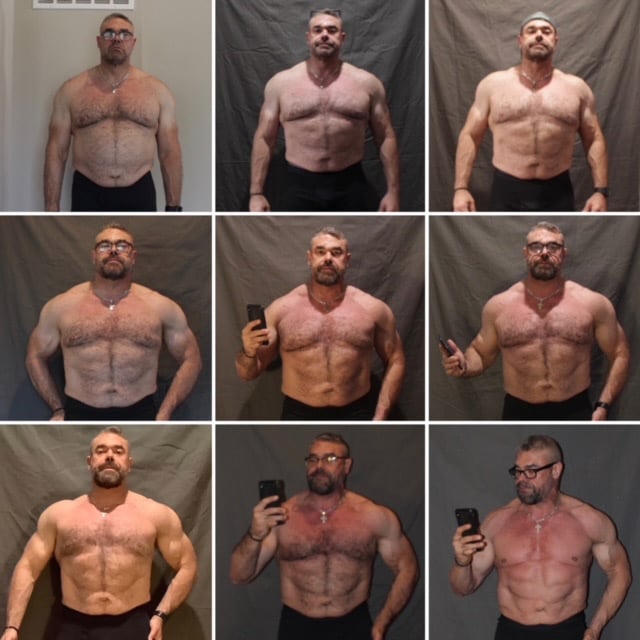 It’s been great to see the impact on the kids too. The twins live with us and I see them weigh out their food and track their macros. They're into working out and as they got older, when I started this they also became more interested in it.

It's positive reassurance that I didn’t waste all these years of eating and drinking water for nothing. Jessica is a little older, but I think it's shown her the benefits of eating and living a healthy life.

It’s difficult to stay at a bodybuilder’s level of conditioning for your entire life. I'll be 52 in January and it's pretty amazing that I was able to make such a significant transformation. I’m not someone with no responsibilities, no house, no worries anymore.

I’m no longer the 20-something who basically went to school worked out. I'm essentially a married 52-year-old, regular guy, who lives in Pittsburgh and sells TV ad space. I was able to make this incredible transformation which is amazing.

I want you to know that this is attainable.

For a lot of people, weight loss is a very private matter. They aren’t happy with their body and they don’t talk about it.

I want people to know that if you’re not happy with anything in your life, you can change it with consistency and discipline. I was at 315lbs and I’m now at 220 with proper nutrition.

If you are looking to make changes to your life, Trifecta is here to help you.