Juvenile Diabetes: What Causes Diabetes in Children & How to Treat It

Juvenile diabetes classically refers to type 1 diabetes, as this historically has been the type of diabetes mellitus that most often occurred in children. In fact, 75% of type 1 diabetics are diagnosed in childhood.

Because the development of type 2 diabetes is significantly influenced by obesity and a sedentary lifestyle, it has historically been assumed to occur in older individuals.

Unfortunately, the rise of the obesity epidemic has included a surge of childhood obesity and is causing a similarly increased diagnosis of type 2 diabetes in children.

While both types of diabetes mellitus have similar symptoms, type 1 diabetes is more commonly diagnosed in children and it can appear to have a faster onset of symptoms. Type 1 diabetes also requires insulin as a treatment and while it has a hereditary component, it does not seem to be as strong as the genetic influence of type 2 diabetes.

Both types of diabetes are diseases caused by problems regulating glucose. Glucose is the name for sugar in the body that is used by all of our cells as fuel - and it is critical for our survival.

Insulin is a hormone in charge of managing glucose in the body. Insulin is needed for our cells to use glucose and also helps excess glucose to be stored (into glycogen) so the body can use it later.

People with type 1 and type 2 diabetes both have problems with insulin, but in different ways and for different reasons.

Type 1 diabetes is an autoimmune disease that results in elevated blood glucose due to an inability to make insulin.

The body loses the ability to make insulin when cells in the pancreas (called beta cells) that are in charge of producing insulin are inappropriately attacked by the immune system.

Type 1 diabetes is most often diagnosed in childhood. People with type 1 diabetes are considered ‘insulin dependent’ because they will always require daily insulin due their inability to make it on their own.

Type 2 diabetes is a disease that results in elevated blood glucose due to insulin that doesn’t function properly. Because their insulin is less effective, they're said to have "insulin resistance". Even though insulin is present, the cells aren’t responding to it well.

While we don't know exactly what causes the insulin resistance in type 2 diabetes, it's strongly associated with being overweight and a sedentary lifestyle. Children with type 2 diabetes are almost always overweight (1).

Unlike children with type 1 diabetes, children diagnosed with type 2 diabetes or prediabetes have the opportunity to recover from the disease. They may never have to be on medication if they are able to lose weight and develop a healthier more active lifestyle.

Depending on the age, treating children with type 1 diabetes can be complex and challenging.

An important part of diabetes education and management includes learning early signs of both hypoglycemia and complications of hyperglycemia. Such symptoms should prompt blood glucose checks and management. It also involves learning the careful balance of food intake and insulin administration with different levels of activity.

Younger children, in particular, may not be able to effectively communicate these symptoms. It also may be more difficult to control what they eat and track how active they are. Furthermore, young child can generally be more delicate - with increased susceptibility to complications such as hypoglycemia and DKA.

All of these factors can make treating the disease more challenging. 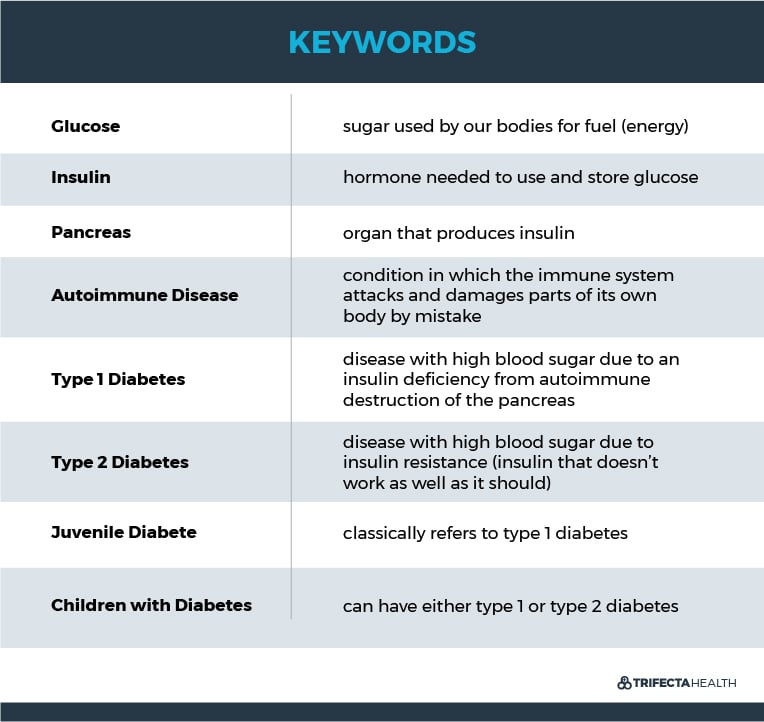 Signs & Symptoms of Diabetes in Children

DKA is a serious condition with very high levels of blood glucose that result in the body becoming too acidic and involves an overall state of dehydration and often significant electrolyte abnormalities.

Children can have symptoms of abdominal pain, vomiting, severe fatigue, weakness, and confusion. If not treated aggressively in the hospital this condition can be deadly.

Management of Type 1 Diabetes in Children

Once diagnosed, the management of type 1 diabetes involves extensive education for both parents and their children. By working with doctors, nutritionists, and ideally a therapist, a plan can be made to integrate management of the disease into the child’s daily routine early on.

Parents can set their child up for success in managing their disease by instilling habits of balancing diet, exercise, glucose checks, and insulin administration and helping them to recognize and treat symptoms of abnormal blood glucose and other complications of diabetes.

Insulin will always be required multiple times daily for children with type 1 diabetes. Insulin injections are the most common form of insulin administration.

Children with type 2 diabetes are almost always obese. One study with >10,000 children demonstrated that 90% were overweight and 80% were found to be obese (4).

Their symptoms may present much more gradually and they don’t usually require insulin injections early in their diagnosis. While they may be at lower risk for serious complications like DKA than children with type 1 diabetes, the disease can have monumentally negative effects on their lives in the future.

How Does Type 2 Diabetes Affect Children?

While the immediate initial presentation of type 2 diabetes in children may not be as dramatic, the disease can impose a massive impact on their lives.

These children are at an increased risk for many additional conditions that is further enhanced by obesity (5).

The effect of obesity alone on children has also been shown to take a significant toll including:

The mainstay of treatment for type 2 diabetes in children is diet and exercise. A multidisciplinary team that includes doctors, therapists and nutritionists are paramount in changing the child’s lifestyle to recover. If this integrative approach is embraced, they are often able to reverse diabetes altogether and prevent a lifetime of ailments they may otherwise suffer from the disease.