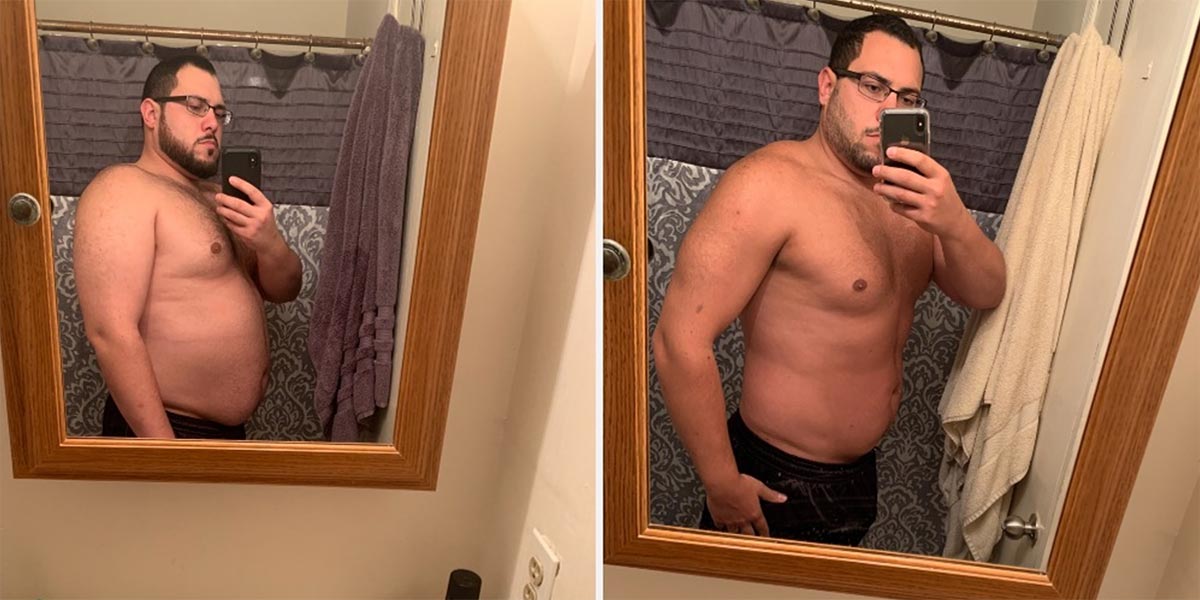 PALEO, BEFORE AND AFTER • 5 min

PALEO, BEFORE AND AFTER • 5 min

Drew’s a 32 year old regional manager from Ocean County, New Jersey. In the past year he got promoted at his job and engaged to who he calls his fitness model fiancé. Through Drew’s good fortune, his fitness and health had taken a back seat. With his eyes on a bright future, Drew knew he needed to set himself and his new family up for success and turned to Trifecta’s paleo meal plan for help.

Drew had let himself go. His words.

“When I was younger like in high school, even middle school, I started lifting weights and working out. I played football and wrestling and I was always in good shape. After high school, I let going out and being social take over my life.”

Drew transition into adulthood isn’t uncommon. As we leave schedules that create for exercise and other healthy outlets behind us and replace them with work and socializing, it can be difficult to maintain the physique and energy levels we were used to. When your lifestyle changes radically, your body likely will too.

“I was a weekend warrior. I was still drinking alcohol and eating carbs. I told myself that I can eat as many carbs as I want as long as I stop before 4 o'clock. I was just doing whatever.”

Four years ago he met his soon to be wife and began his career. Work was going great but the demand of increased responsibility forced him to sacrifice taking care of himself even more.

“I got in good with my company and just totally put my exercise and taking care of myself on the back burner. It was good for my career but it's been bad for my long-term health.”

Drew got promoted and engaged. His responsibilities weren’t going anywhere and he wanted to be a healthy husband for his fiancé and eventual family. At a Christmas party, he found himself in a bathroom with a scale and jumped on out of curiosity. When the scale read 298, Drew was shook.

“I saw 298 staring back at me and I never wanted to break 300. That killed me inside because I was always pretty active. So I said, you know what, that's that's it. I got to get my grind on. I got to start doing my thing.”

Because of his history with sports and fitness, Drew knew his way around the gym.

"It was great for you know, the first two months and then this whole COVID thing happened. I couldn't rely on the gym anymore. So I had to figure something out meal wise."

Without a history of cooking or the time to actually do it, Drew needed a solution.

“I don't have time with my career to actually cook. I do have time on the weekends but I never get around to it. I tried Freshly first and didn’t really like it too much. Then I found you guys.

“I saw Trifecta all over Facebook so I switched over and I really liked the food so I continued to order it.

“Having everything already premade for you, ready to go, everything's measured and weighed out, it's the right macros, I'm good to go with that.”

Drew is on the Paleo diet which is based on lean meats, nutritious fruits and vegetables and the elimination of grains and other modern ingredients not available during the Paleolithic era.

With his nutrition dialed in, Drew wanted to begin exercising again. With the gyms closed, he found help back on the football field, the place where Drew once shined.

“I met up with a trainer and we've been going to the football fields. I've been eating right, doing some good training, some calisthenics and some light weights.”

With some gyms reopening on the East Coast, Drew’s been able to ramp up his routine even more.

Combining proper nutrition and exercise, Drew’s seeing the results he was searching for, losing over 25 pounds in his first four months. But this is just the beginning of his journey.

“I'm really excited to see where I can go with this. It seems like there’s some muscle memory because a lot of the stuff coming back to me from what I was younger. I’m trying to lose body fat percentage and tone up”

Drew’s new outlook is right on time. He’s getting married in November! He wants to look good for the wedding and honeymoon but also be healthy for the long haul with his new family.

“When you wake up and you feel heavy and you have a hard time breathing, you know, it's definitely time for a change. I want to be able to run around with my kids and enjoy my life and not feel so weighed down and tired all the time. I don't want to start to develop health problems. So I knew I had to pick a plan and stick with it.”

For others looking to start their own fitness or weight loss journey, Drew emphasizes creating a routine and sticking to a schedule.

“It's very very difficult to just wing it.”

He also recommends finding a work/life balance so you can do what you need to take care of yourself. While he values balance, Drew isn’t one for cheat days.

“I know that I can diet all week but if I spend one night of the weekend eating a bunch of carbs, bread pasta, drinking some beers, I know I’m gaining back everything I lost plus more. Beer and the carbs, they don’t agree with my body.”

“I already ate whatever I wanted for so long and I'm getting married November 14. So it's like, we're almost there.”

It’s not just the wedding that motivates Drew. His fiancé herself is a major source of inspiration for him. She’s gone through her own weight loss journey and she and Drew regularly work out together.

“She lost almost 130 pounds and she really put her time in. She's been exercising religiously for about five months now and she’s completely transformed her body. She’s a completely different person now.”

“I call her my fitness model.”

“I can’t let her show me up and I want to be with her forever.”

Shenai's 45 day Transformation With Trifecta Vegan and the F45 Challenge