Keto Diet for Diabetes: Is Low Carb the Answer?

The word ‘cure’ is used so sparingly with any chronic disease. But in this case, the right diet and lifestyle choices can often prevent and cure type 2 diabetes (1, 2).

Any diet that promotes effective weight loss can have a positive impact on people with diabetes. However, some people are arguing that low carbohydrate diets, and maybe even the ketogenic diet might be the best equipped for the job.

The most well established nutritional recommendations for people with type 2 diabetes is weight loss through calorie control (3). While there is a general agreement that carbohydrate intake should be controlled in diabetics, there is still debate regarding how low they should actually go in their carbohydrate consumption (4) .

However, many studies have shown positive effects of a low carbohydrate diet in people with type 2 diabetes.

These studies suggest that low carbohydrate diets can help to improve cardiovascular risk factors such as cholesterol levels, HbA1c and insulin sensitivity (5, 6) .

What is the Ketogenic Diet?

The ketogenic diet is a very low carbohydrate high fat diet that causes the body to transition into something called ketosis. In a state of ketosis, the body can transition to actively utilizing fat for fuel.

While in ketosis the body theoretically can be more effective at losing weight. While there are a few studies in humans to support this theory, they are relatively small and there hasn’t been enough evidence to conclude it’s  superior to other diets.

Why Ketogenic May be the Best Diet for Type 2 Diabetes

Despite the limited evidence that ketosis is key to a diabetic diet, the arguments for its potential to positively influence people living with type 2 diabetes are intriguing and certainly warrant further investigation.

There is a theory that when the body is in a state of ketosis on the ketogenic diet, insulin works better. If this were true, the ketogenic may be uniquely fitting for diabetics.

Studies have shown improved insulin function and weight loss after people with diabetes consume a ketogenic diet – this effect was greater on a ketogenic diet when compared to traditional calorie controlled diets (7).

While this theory seems promising, more studies are needed to determine if the state of ketosis improves insulin function in diabetics more than other low-carbohydrate diets that don’t involve ketosis.

In the end, we know weight loss is key. Weight loss has undeniably led to improved insulin sensitivity and can eliminate the requirement of people with type 2 diabetes to take medicine for their disease.

Yes, losing weight – and keeping it off – can cure type 2 diabetes in some individuals (9).

More studies are certainly needed to determine if the ketogenic diet is superior to these other diets for shedding pounds.

Weight loss is certainly not unique to the keto diet. Appropriate weight loss through any reasonable diet can be beneficial for type 2 diabetes.

In the end, the diet that works will be the calorie controlled diet you consistently follow!

What’s the Difference Between Ketoacidosis and Ketosis?

One of the misconceptions that may have contributed to the keto diet having a bad reputation in some communities is confusion between ketosis and ketoacidosis.

Ketosis is a normal and important function that allows us to continue fueling our body when glucose isn't readily available.

It is a term used to describe a metabolic process the body utilizes to extract glucose from triglycerides. In other words, the body begins to burn fat for energy when there isn’t enough available glucose.

Substances called ketones are released during this process and excreted in the urine, which we can measure. These ketones help us to determine when the body is in this state of using fat for fuel.

Goal ketone levels in the ketogenic diet are typically 0.5-1mmol/L. Although some sources recommend up to 3 mmol/L, higher levels aren't often suggested.

Diabetic ketoacidosis (DKA) can occur in diabetics with very high blood glucose levels. Their body produces high level of ketones and acidity increases in the body. Ketone levels are usually greater than 15 mmol/L in ketoacidosis.

It can lead to death if left untreated – and even when appropriately treated in some severe cases. 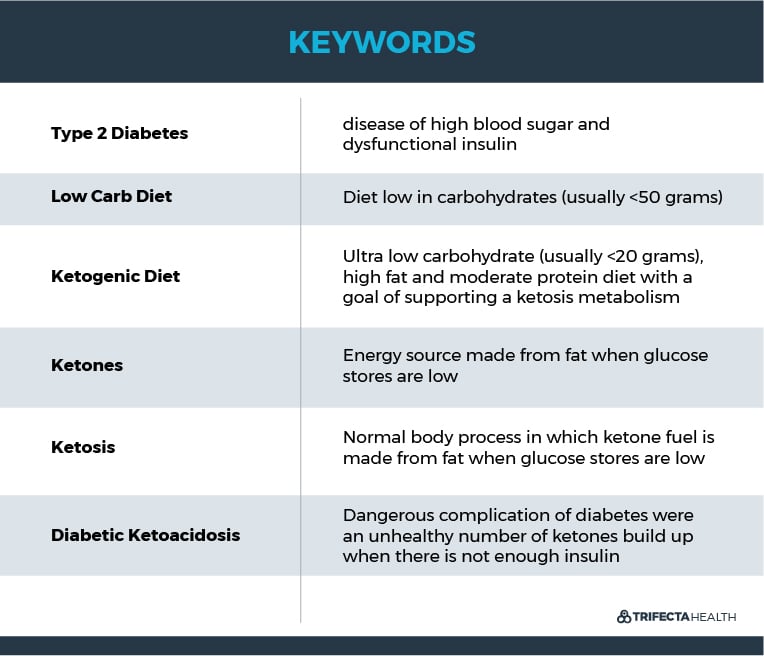 Is Diabetic Ketoacidosis More Common on the Ketogenic Diet?

This is another reason it is so important for people with type 1 diabetes (and insulin dependent type 2 diabetics) to talk to their doctor before embarking on this diet.

It is frequently recommended that if type 1 diabetics choose to start the ketogenic diet they do so with a more gradual transition into a low carbohydrate diet in order to reduce the risk of ketoacidosis and hypoglycemia. For example, a common recommendation for type 1 diabetics is to start at 50 grams of carbohydrates daily with close monitoring.

If your blood sugar is ever greater than 240, the American Diabetes Association recommends checking your ketone levels (11).

Risks of the Ketogenic Diet for People with Diabetes

While the ketogenic diet is generally safe when properly used, it's definitely not for everyone. For example, pregnant women should probably not be on a truly ketogenic diet as this may not be safe for the baby they are carrying.

Hypoglycemia is the term used to describe the state when blood sugar level gets too low (<70) (12). Glucose is vital for your body to function properly. Hypoglycemia can lead to many scary conditions including:

Type 1 diabetics and diabetics on medications can be more susceptible to hypoglycemia while on the ketogenic and other low carbohydrate diets.

Diabetics who take insulin are at the highest risk for hypoglycemia while on the ketogenic and other low carbohydrate diets. If prescribed insulin isn’t adjusted to take into consideration a very low carbohydrate diet then there is a high risk of administering too much insulin.

Therefore, it’s very important all diabetics on insulin injections consult with their doctor before starting the ketogenic diet.

The good news is that insulin requirements can dramatically decrease while on the keto diet  - and type 2 diabetics have the potential to stop requiring any insulin injections at all!

Oral medications - especially a medication class called sulfonylureas (ie: glipizide, glimepiride and others) - can also cause dangerous hypoglycemia. So similar to insulin injections, it’s important to talk with your doctor about potentially adjusting your oral medications when dramatically changing your diet.

If you haven’t yet been prescribed any medication and are attempting to control your diabetes with diet, going keto could be the way to go. Because there is no “extra insulin” that you’re giving yourself, you should not be at risk for significant hypoglycemia. You may however find that your sugars are soon well controlled!

Bottom line: the ketogenic diet can lead to progressive improvements in blood glucose. If you take medication to control your glucose, you may require less overtime. You may eventually be able to stop taking your medication completely.

When eliminating such a large food group from your diet it’s important to ask the question: Is there something I’ll be missing?

Carbohydrates can offer many health benefits.

There is a plethora of evidence supporting the benefits of carbohydrate loaded whole grains including reducing the risk of heart disease, diabetes, obesity and even some cancers (13). The right carbohydrates also offer many micronutrients including vital vitamins, minerals and fiber.

However, it’s very possible to consume all of the micronutrients you need without carbohydrates – but you need to know where to look to incorporate them into your eating plans. It's important to continue including all of the necessary micronutrients in your diet when significantly limiting carbohydrate intake. You can also still get your heart healthy whole grains while following a ketogenic diet by choosing to consume these as your limited daily carbohydrate intake.

How Diabetics Can Safely Start the Keto Diet

If you're a diabetic, here are some tips to safely starting the keto diet.

1) If You Take Medications, Talk to Your Doctor First

Because the keto diet can be so powerful for people with diabetes, it’s important to talk to your doctor if you take any medications that help control your blood sugar. These medications may need to be adjusted when starting the diet and may need to be lowered as you continue your diet journey.

2) Learn About the Keto Diet

Like any major undertaking, it’s always best to be prepared and arm yourself with information.  Learning more about what the ketogenic diet involves will help you on your pathway to success.

So, this diet can feel really complicated for most people - because, well it is! It’s important to meal plan to set yourself up for long term weight loss victory while on the diet.

Science supports writing down what you eat! Studies have shown that people who keep a food log can lose up to twice as much weight as people who don’t. Because the keto diet involves careful macronutrient balance, doing the diet right depends on developing a good way to keep track of what you consume.

To learn all about how to count your macros on the keto diet read this: Keto Macros Calculating & Tracking Success Guide.

Phone apps like the Trifecta app can become an ideal tool for macro tracking anywhere you go.

Because this diet can so dramatically influence your blood glucose and health, it’s important to regularly check your sugars if you have diabetes. Your doctor may also discuss the possibility of checking other blood markers more frequently - such as triglycerides and HbA1c while you're on

Curious about going keto or want to make sticking to a low carb diet easier than ever? Get nutritious, premade keto meals delivered right to your door with Trifecta's Diabetic Meal Delivery. Six different low carb plans to choose from!