11 Ketogenic Diet for Weight Loss Studies Reviewed; News from Harvard on the Horizon 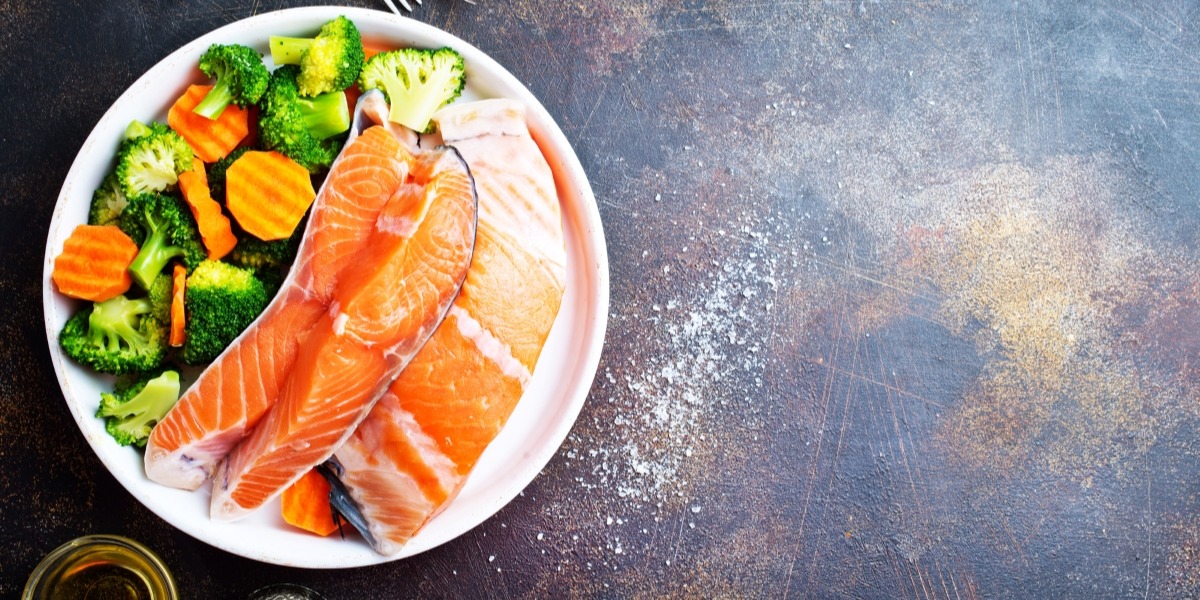 Whether it’s with uncontained enthusiasm or harsh criticism, it’s hard to avoid hearing something somewhere about the new Keto-Craze.

So is keto the key to weight loss we’ve been missing all these years?

Or is it a dangerous fad that we should be warning our friends and family about?

The truth is, the answer is probably not going to be found on either end of these extremes. With any new hype involving such polarizing opinions, it’s always important to go back to the books and look at what the science says.

This article includes a summary of  peer-reviewed clinical studies to date, a promising new study in the works, and future research involving the keto diet for health and weight loss.

Looking for a comprehensive overview on all things keto? Read this article: The Keto Diet Explained by a Doctor and Dietitian.


Why is losing weight and keeping it off so darn difficult?

But is there anything that makes the ketosis approach unique from other low carbohydrate diets?

Well, it turns out our bodies are hard wired from back in the ‘caveman days’ to ensure we’re getting enough nutrients. So, when we start losing weight, various hormones are released to make us really hungry and to encourage our body to decreases our overall energy to conserve what we have. If you’ve ever been on a diet you can probably attest to feeling more fatigued and hungry!

Can ketosis provide a way around this? Theories and some early studies suggest that when a state of ketosis is achieved, the signals in your body to increase hunger and decrease energy are suspended - ideally leaving you energetic, satiated and thus more capable of sticking to your diet (2).

There are many well done studies showing how the ketogenic diet can successfully treat seizures (3). These studies and others suggest that the ketogenic diet is safe for children with epilepsy and for individuals utilizing it for weight loss (4, 5).

However, the manner and extent to which ketosis may benefit other health conditions including how ketosis may independently accelerate weight loss beyond the well accepted calorie control paradigm has thus-far largely been based on theories (6). Unlike the plethora of positive data on ketosis for seizures, there are very few clinical studies that look directly at its independent effect on weight loss.

Below includes a summary of the science that exists thusfar evaluating the keto diet for weight loss. All of the studies included are peer-reviewed and on human participants.

Bottom Line: From the little evidence that exists, there seems there may be a positive effect of the ketogenic diet on weight loss. However, more research is needed to determine if ketosis is uniquely beneficial for shedding unwanted pounds.

Is Ketosis an Appetite Suppressant? 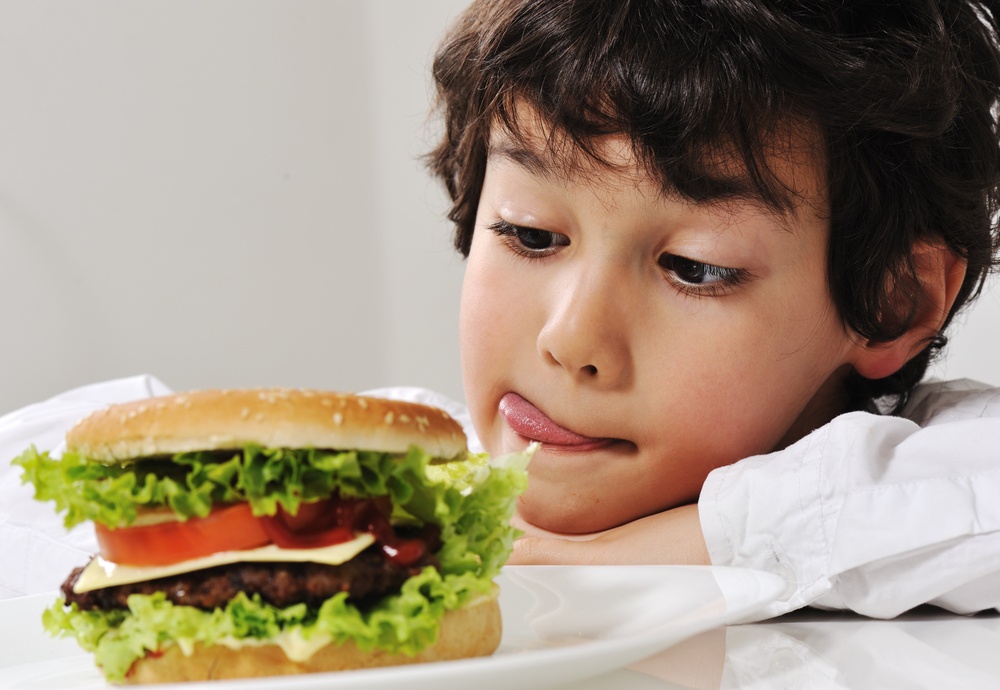 Some people believe that being in a state of ketosis can actually suppress your appetite.  So how exactly could this diet affect your hunger and satiety?

A special substance in your body called 'ghrelin' is often referred to as ‘the hunger hormone’ and has therefore been of particular interest in this debate. Your body traditionally increases ghrelin in order to stimulate your appetite. Some theories suggest ketosis may decrease your appetite by suppressing a rise in ghrelin.

Let's see what the studies so far say.

This meta-analysis looked at all of the peer reviewed published studies on the effect of the ketogenic diet on appetite suppression in people. 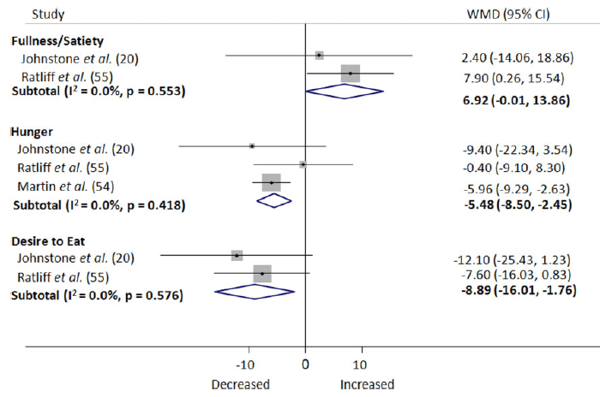 Discussion: This information provides a mixed picture, showing that it’s not yet clear if ketogenic diets can effectively suppress appetite. As many of these studies have conflicting results, more research is needed to elucidate the effects of ketosis on hunger.

While on the ketogenic diet, people had increased levels of b-hydroxybutyrate (marker of ketosis) and levels of ghrelin were suppressed. On the balanced diet the markers of b-hydroxybutyrate was not elevated and ghrelin levels were elevated. Glucose, amylin, leptin, and subjective measures of appetite were lower in the ketogenic diet compared to the balanced diet. 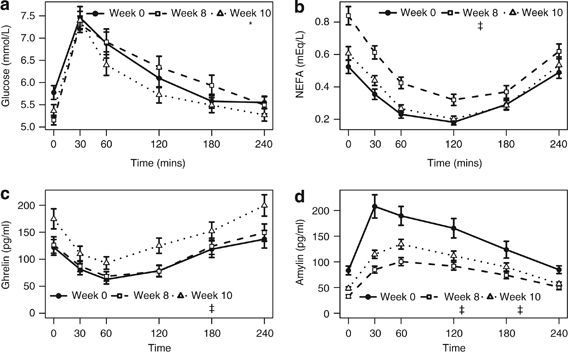 Discussion: This small study supports the theory that ketosis may suppress both ghrelin and appetites.

Discussion:  It's important to be careful when interpretting this study, as with many others it is very small and may incorporate many elements of bias. However, it's conclusions support the theory that ketosis may blunt hunger and could be a superior diet for weight loss.

Many studies support a low-carbohydrate diet may be superior to low fat diets. But what research involves comparing the ketogenic diet to low-fat diet?

This meta-analysis did a lot of literature review for us. It looked at all of the randomized controlled trials published on evaluating weight loss in very low carbohydrate ketogenic diets and low fat diet studies prior to its publication in 2013.

These authors found the 13 studies (randomized controlled trials) that had been done to date of patients on a Very Low Carbohydrate Ketogenic Diet (VLCKD) or a Low Fat Diet (LFD) and had a follow up evaluation of their participants in at least one year. The studies primarily looked at bodyweight. However they also measured other health measures including cholesterol, blood pressure and glucose.

Much debate exists on whether all calories are created equally when it comes to weight management. Do macronutrients matter when losing weight?

5) Partsalaki I, et. al. Metabolic impact of a ketogenic diet compared to a hypocaloric diet in obese children and adolescents.

58 obese children were assigned to either a low calorie diet or a ketogenic diet for 6 months.

The authors concluded that the "ketogenic diet revealed more pronounced improvements in weight loss and metabolic parameters than the hypocaloric diet".  While this has the potential to be true, the results of this study cannot make conclusions that either diet is superior to the other as these small differences could be due to random chance. Both diets were found to be effective at promoting weight loss in this study. More research is certainly needed to determine if the ketogenic diet may be superior to low-calorie diet in obese children.

6) Moreno, B et. al. Comparison of a very low-calorie-ketogenic diet with a standard low-calorie diet in the treatment of obesity.

A group of individuals were randomized to either very low-calorie-ketogenic diet (VLCK) or very low-calorie diet (LC). Both groups received similar external support including counselling on physical activity. Weight loss was evaluated at 2 months and 12 months.

Discussion: The very low-calorie-ketogenic diet led to significantly greater weight loss than a traditional low-calorie diet when evaluated at 2 and 12 months.

Can keto be a long term solution for weight loss? Theoretically, yes. But there are so many ways one can go about involving ketosis in keeping weight off.

Is a perminant state of ketosis the most effective way to stay fit?

Or can intermittent periods of ketosis among an otherwise balanced diet be just as or even more effective than persistent sustained ketosis?

Discussion: People in the study enjoyed successful weight loss and improvement in cardiovascular markers by alternating between ketosis and a balanced diet. However it's important to note that this did not evaluate whether intermittent ketosis is more or less effective than sustained ketosis or other non-ketotic diets.

8) Moreno, B et al. Obesity treatment by very low-calorie-ketogenic diet at two years: reduction in visceral fat and on the burdern of disease. 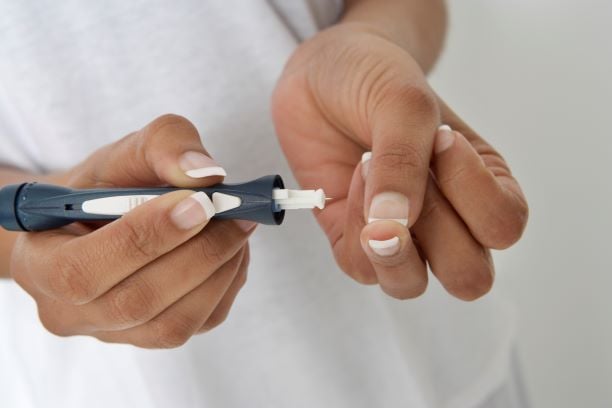 People with diabetes may uniquely benefit from the ketogenic diet in a variety of ways. Because the nature of diabetes involves an inability to process carbohydrates appropriately due to inadequate insulin function, it makes sense that decreasing the number of carbohydrates consumed may be beneficial for the disease. Additional studies demonstrate ketosis improves insulin function and therefore could have additional significant positive effect on these individuals (7).

363 adult patients ate either a low calorie diet or a low carbohydrate ketogenic diet for 6 months and completed a 24 week follow up evaluation. Body weight and various chronic disease markers were evaluated between those who were diabetic and those who were not diabetic in each diet group compared.

While both diets led to improvements in body weight and chronic disease markers, these effects seemed to be more substantial in the low carbohydrate ketogenic diet group including a significantly greater improvement in HbA1c in the ketogenic group compared to the low calorie group. 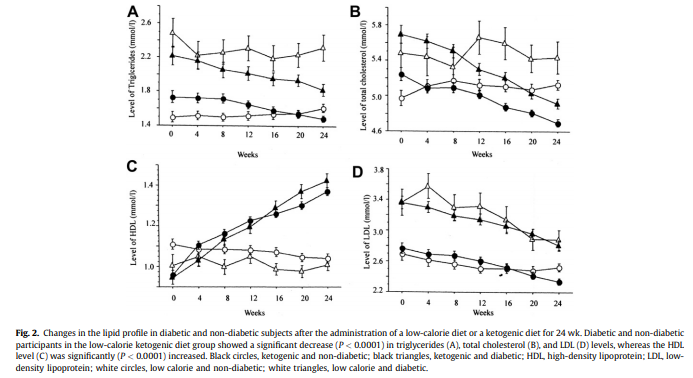 Discussion:  A low carbohydrate ketogenic diet may be superior to a low calorie diet alone for patients with diabetes.

89 adults with diabetes were randomized to either a low calorie diet or a ketogenic diet for a duration of 4 months.

Weight loss, reduction in waist circumference and HbA1c was significantly greater in the ketogenic diet than in the low calorie diet.

Discussion: This study supports that the ketogenic diet is superior to a low-calorie diet in improving glycemic control and weight loss in people with diabetes. 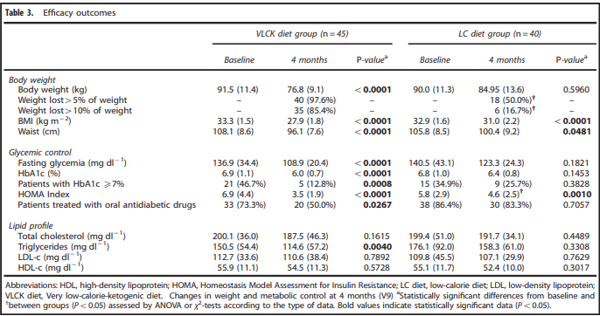 Is the Ketogenic Diet Good for Your Health?

Randomized controlled trial of 53 individuals to a very low carbohydrate diet or a calorie restricted diet for 6 months. Calorie in take was similar between both groups. 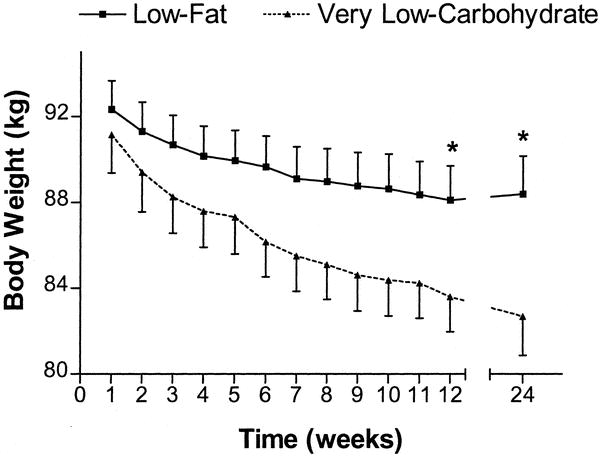 Discussion: While fairly small, this study provides support that a very low carbohydrate diet may have a greater impact on weight loss than calorie control alone. It also supports that this diet is safe and suggests the keto diet may improve cardiovascular risk factors.


As explained above, the theory that ketosis independently supports weight loss and also ‘tricks’ your body into not being as hungry has been evaluated by very few small studies.

Dr. Ludwig et al at Harvard University is amidst the largest and arguably most well controlled study evaluating the effect of the ketogenic diet on weight loss and health (9). He is working with 125 adult participants with obesity who will be living in a residential facility for 13 weeks during which time their diets will be strictly controlled. Participants will be randomly assigned to one of three groups where they will be exclusively eating either a very low carbohydrate (ketogenic) diet fueled by food from Trifecta, DASH low sugar diet or DASH high sugar diet. 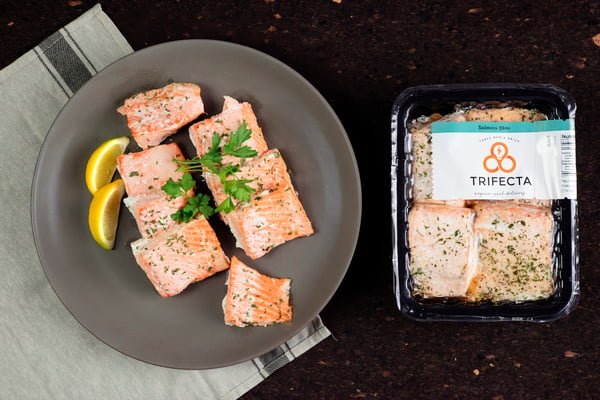 Not only will this study be comparing these three diets for weight loss efficacy in a highly controlled environment, but it will also be evaluating the effect of different quantities and types of carbohydrates on health and weight loss. Furthermore, they will also be comparing the effects each diet has on other cardiovascular risk factors, such as lipid profiles and insulin sensitivity.

As DASH (Dietary Approach to Stop Hypertension) is currently one of the most well accepted diets among the medical community for obesity and other cardiovascular risk factors, results from this study have the potential to challenge current nutritional dogma if the keto diet is found to be superior.

Despite the high anticipations many hold for the results of this study, it may be just the beginning of work needed to evaluate the potential power of keto. Well done studies evaluating the potential difference between traditional low carb diets and the very low carbohydrate ketogenic diet have yet to be performed. And while this ongoing Harvard study is the largest and most well controlled on the ketogenic diet to date, even more research and more participants are needed to provide enough data needed to change recommendations for health and wellness.

Psst...Want to learn more about Keto from our RD and