Ketosis vs Ketoacidosis: What's the Difference?

Ketosis resulting from a ketogenic diet is thought to be relatively safe in many people, as it is a natural phenomenon that occurs as a protective measure when carbs are not readily available. In fact, babies, young children, and pregnant women are able to quickly enter ketosis after short periods without food or carbohydrates (1).

However, many confuse ketosis with ketoacidosis, a dangerous condition that can occur in diabetics - they are not the same thing (2)! This might be some of the reason why some people claim a keto diet isn’t healthy, giving it a bad reputation.

To help clear up some of the confusion, here is the breakdown of each state to help you understand the differences between the two.

Having trouble cutting carbs to get into ketosis? Download this free keto meal prep toolkit - complete with everything you need to master a keto diet and get results.

Ketosis is a metabolic state in which the body primarily uses fat for energy in the form of ketone bodies.

Under normal circumstances, a majority of your daily energy, especially your brain fuel, is supplied with carbohydrates or sugars in the diet. When you restrict carbs through dieting or fasting, your body has a way to compensate using fatty acids through a process called ketogenesis.

Fatty acids are turned into a quick source of fuel, called ketone bodies, and when ketones become your primary source of energy, you enter a state known as ketosis.

Ketosis is the goal of many keto dieters looking to burn more fat and promote fat loss. It is also a fairly normal metabolic state that occurs any time carb intake is not sufficient and is thought to be safe for most individuals.

Ketoacidosis is a life-threatening state characterized by the rapid breakdown of fatty acids and high amounts of ketone bodies in the blood - causing the blood to become acidic (2).

Ketoacidosis is considered to be a form of ketosis, but the cause differs significantly from a typical diet-induced ketotic state. Ketoacidosis is most common in type 1 diabetics because of their need for insulin.

When insulin medication isn't taken properly, ketone production can increase, rising to dangerous levels, leading to ketoacidosis. Other frequent triggers include infections and other major stressors on the body, such as heart attacks. 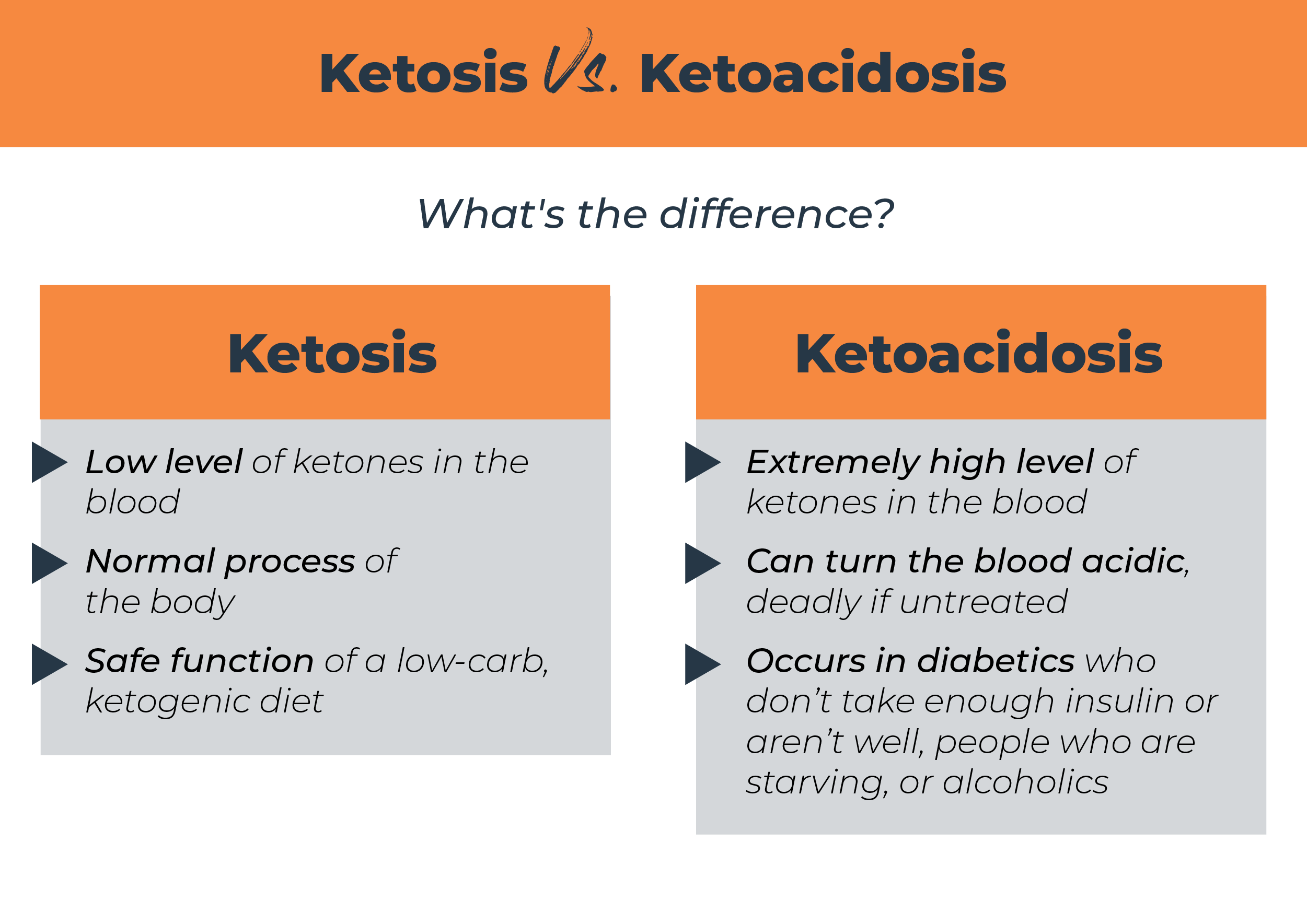 Switching from sugars to fat as your primary source of energy can be a big change for many, which results in certain undesirable side effects - most commonly referred to as keto flu. But aside from the brief and slightly uncomfortable transition into ketosis, nutritional ketosis itself is not associated with many drastic symptoms.

The most notable signs of ketosis include fruity breath (keto breath) and increased ketones in the urine.

Because a ketogenic diet can cause favorable outcomes in some people, other described side effects of ketosis include:

However, these results can vary widely from one person to the next.

Diabetic ketoacidosis (DKA) is severe and life threatening. DKA often presents with people being dramatically ill and these symptoms can develop fairly quickly - usually within 24 hours of onset. Some early signs of DKA can mimic those of diabetes, as well as keto flu, and can include:

More targeted symptoms can be diagnosed through blood and urine and are characterized by high blood sugar levels (hyperglycemia) and ketone bodies in urine. You can easily check both of these levels using at-home tests like ketone test strips and blood sugar monitoring tests.

The difference between ketosis and ketoacidosis is the number of ketones found in the urine, usually at levels greater than 10 mM. While the exact amount to be considered ketoacidosis can vary base don multiple factors, if you are using keto test strips, the following ranges can be considered.

DKA most often occurs in individuals with type 1 diabetes, and your risk is increased when coupled with the following:

While less common, conditions such as trauma, surgery, or infection can increase the risk of DKA in those with type 2 diabetes as well (3,4).

It is extremely unlikely that ketoacidosis would occur in anyone without diabetes. Cases have only been seen in children, along with adults who suffer from alcoholism, prolonged starvation, or an overactive thyroid (5,6). A low carb diet alone will not put you at risk.

How to Prevent Ketoacidosis

Consider following a routine meal plan and medication schedule to help keep you consistent and reduce your risks.

When to See Your Doctor

Diabetic ketoacidosis is a medical emergency, and you should seek help immediately if you experience any symptoms.

Treatment for DKA includes insulin therapy, along with electrolyte and fluid replacement (7).

While ketosis and ketoacidosis may sound somewhat similar, the cause of and outcomes of these two terms are actually drastically different.

Ketosis is a safe and normal metabolic state that occurs through significant carb restriction - mainly through a keto diet. Versus ketoacidosis, which is a dangerous medical condition that occurs in diabetics who do not get enough insulin to manage their blood sugar levels, leading to very high ketones levels in the blood and acid build-up - which can lead to coma or death.

Regardless of what you might have heard, following a keto diet or cutting carbs is not going to cause ketoacidosis people who are not taking insulin.

However, its is important to note that type 1 diabetics (or anyone on insulin - which includes many type 2 diabetics) are more susceptible to DKA when on keto diet. Thus, anyone taking insulin should talk with their doctor before starting the keto diet.

Achieve ketosis and master your keto meal plan with this complete keto meal prep toolkit. Get everything you need to cut carbs and start burning more fat!