Carbohydrates are an essential macronutrient, and are needed in any kind of diet (even keto allows for a small amount). With this in mind, and with the lifestyle guidelines of paleo, find a flavorful paleo-approved carbohydrate side to satisfy your dietary needs.

Spaghetti squash gets its name from, well, it's striking resemblance in texture and form to actual spaghetti pasta.

This winter vegetable belongs to the cucurbitaceae family and is a seasonal vegetable similar to pumpkin, zucchini, and gourds.

You could very simply cook this vegetable by halving it, removing the seeds, seasoning with oil, spices like sumac, salt, and garlic powder, and roasting it in the oven for around 45 minutes (now you have two recipes in one blog post. My pleasure). But we take it further to mimic an authentic plate of delicious spaghetti (imagine a kind of lower carb carbonara).

The bacon is just the cherry to the top - it adds a savory and flavorful aspect to the dish, plus some fat for satiation.

How to Make a Paleo Creamy Bacon & Spaghetti Squash Recipe

This recipe takes about 10 minutes to prepare, and about 45 minutes to cook. It makes 8 - 5 oz servings. 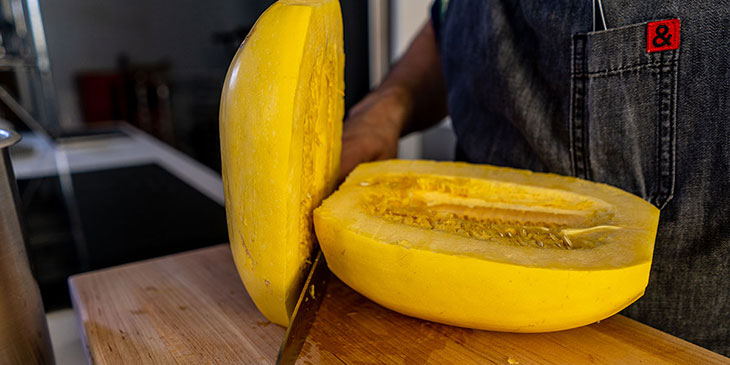 Get two sheet trays lined with foil. In one of them, lay the two halves of the spaghetti squash face down so that the skin of the squash is facing up. 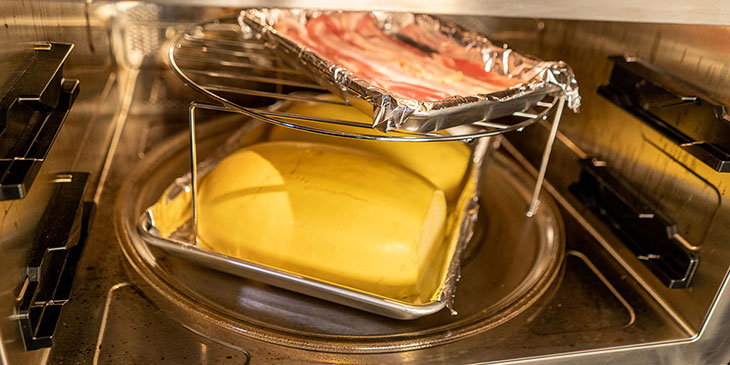 In the second sheet tray, lay the 3 bacon strips next to each other without overlapping them.

After the 12 minutes have passed, remove the bacon from the oven, and let cool on paper towels. Once cool, rough chop and transfer to a small bowl. Keep aside.

Prepare the garlic, coconut milk, maple syrup, and apple cider vinegar (pre measure them in small individual containers or have them on the side for easy addition.

Remove the spaghetti squash from the oven and poke with a fork. If the fork pierces through without any resistance, the squash is done cooking. Otherwise, add 10 minutes in the oven and cook until the fork pierces the squash without any resistance. Let cool on the side or for a faster process, transfer to a room temp tray and cool down in the fridge. 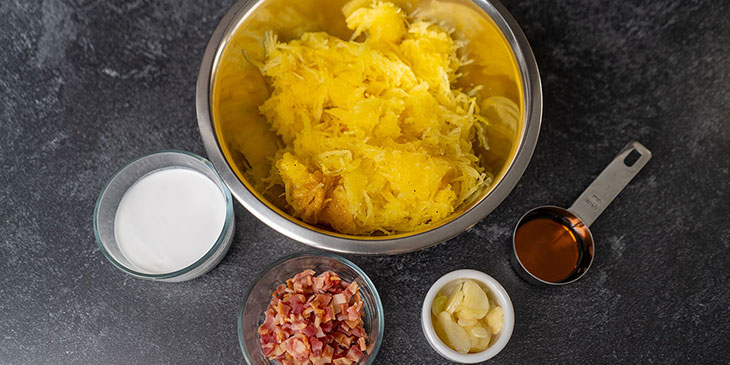 Once cold to the touch, scrape the spaghetti squash off the skin using a fork. Turn the squash upside down, so that the skin is facing down and scrape from one end to another. Transfer contents to a bowl.

Heat 1 tablespoon of avocado oil in a medium skillet, over medium heat. Add the minced garlic and cook for 2-3 minutes stirring often. This will slowly caramelize the garlic and will also infuse the oil with a garlic flavor, thus constructing an aromatic base flavor to the dish.

Add the bacon and cook for another minute to two. Deglaze the pan with apple cider vinegar. Mix, and add the coconut milk. Mix and add the spaghetti squash. Mix and add maple syrup. Season with kosher salt and black pepper.

Bring to a boil and slightly reduce the liquid. Remove from heat and cool down. Store in containers or serve immediately.

For more inspiration on different paleo foods, check out this list.

This fun low-carb take on a carbonara is a delicious side that mixes the sweetness of the roasted spaghetti squash with the savory notes of the bacon and rounds up the dish with a small amount of healthy fattiness from the coconut oil. Serve it with any of your paleo meals!

Tag us on Social Media

If you made this recipe, tag us on Instagram @Trifecta

If you have any comments or questions, tag @ChefMario