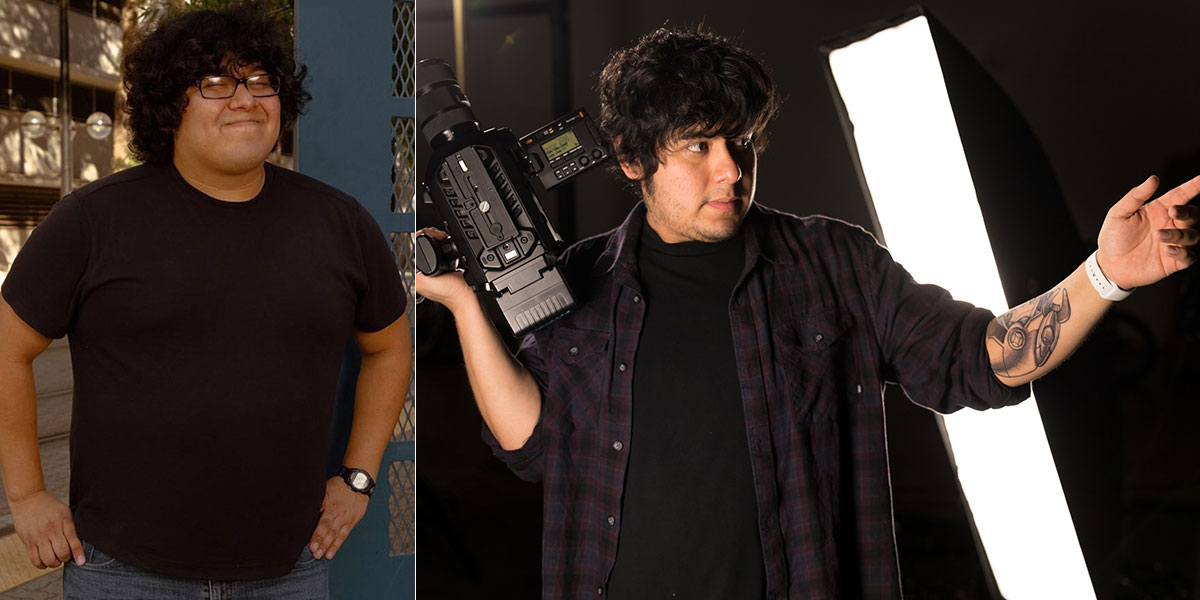 How Javier Lost 80 Pounds on a Vegan Diet

Javier thought he had it made. When others around him were watching what they ate or gaining weight, he could eat anything he felt like with zero consequences.

What seemed like a miracle was actually a serious autoimmune disorder called Graves disease, affecting the thyroid. Learning this was just the beginning of an unexpected journey that literally transformed Javier. With Trifecta vegan meals, a la carte proteins and the habits picked up during the TrifectaME 90 Day Challenge, Javier is cruising toward his goals.

Javier is a videographer and director based in Sacramento, CA. Javier’s passionate about narrative storytelling in film that evokes emotion in his audience. Javier’s own story has an arc of incident, complications and overcoming obstacles that makes him a truly remarkable character. We caught up with Javier to talk about his weight loss journey and inspiring others

“Back when I was in college, I was diagnosed with Graves disease, which is essentially an overactive thyroid and the benefits of that were essentially you can eat whatever you want and you're going to lose weight.

"At first I had no idea that there was anything wrong, I thought I was lucky. I’m a college guy eating junk food with all my roommates, but while they're all getting that Freshman 15, I'm over here losing weight."

Javier didn’t second guess his good fortune. Who would? For a lot of people the idea of eating anything and losing weight is a dream come true. It wasn’t until Javier had to see a doctor for a foot injury that he discovered anything was wrong.

"I went in and the doctor said, ‘your blood pressure is really high.' He ran some tests and that's when we found out I had an overactive thyroid, which is why I was losing so much weight so quickly."

The doctors treated his condition with radioactive iodine to help the thyroid shrink to a normal size.

"What ended up happening though was it worked too well and my thyroid shrunk too small. So that is what sort of led to the downfall of eating whatever I want and having no consequences. It then sort of transformed into anything I ate I would gain weight."

"It was really difficult at first. I tried really hard to stay on track and make sure I didn't balloon too much but when I left college and tried to do my own thing and when I started getting a lot of work, I realized that I wasn't really focusing too much on what I was eating.

"I figured, “Well, there will be time to course correct, I just need to focus on my career right now and then I just started seeing the number on the scale grow and grow.

"The last time I had stepped on the scale I was 285. That was the biggest I had ever been and quite frankly I was probably even bigger. I was just too scared to hop back on after that day."

Javier had a connection with a kinesiologist who taught him about macros.

"He recommended that if I want to lose weight that I should not focus so much on calories, but on the macros. It was as if he was speaking another language, I had no idea what he was talking about.

He tried explaining it to me and it was just sounding way way more complicated than it needed to be for my sake. But then he mentioned Trifecta and how they do all the macros for you. It makes it really easy.

Trifecta’s meals and ingredients are portioned to meet your macro needs and help you keep track of how many you’re eating each day. With the Trifecta app, tracking your macros is as easy as scanning our QR-code and digging in.

Reimagining his relationship wasn’t easy for Javier. Having spent years of his life believing he could eat anything he wanted only to gain weight eating virtually anything made it difficult for him to trust the food he was putting in his body. While most people spent their lives figuring out how they’re body reacts to food, Javier was getting a crash course in calorie control.

"All through life you hear the very basic stuff like eat more greens and all that other stuff.

"The doctor told me, 'Hey, you know, you're going to start to gain weight,' and it's not that I didn't take it seriously but my level of caution wasn't as high as it should have been. Instead of a large meal at Jack In The Box I’d get a medium, but I'm still at Jack In The Box.

"It was cheap and easy to eat very poorly."

I never had to think about the positives or negatives of food.

Jason was afraid restricting his portions would never work after never needing discipline, but his commitment to losing weight kept him focused. Trifecta meals are high in protein so you fill up faster with fewer calories.

"I just kept remembering when the scale read 285 and decided just to stick with it and push forward. I realized if there was a point for me to lose weight it would be right now. It was not going to get easier for me, especially with my thyroid issue.

"It's really hard to lose weight with a weak thyroid. So I figured the longer I wait the harder it's going to be. Luckily for me the food was really good and it was super easy to work with, just microwave and eat."

Putting Food in its Place

Javier's relationship with food has come full circle. When he ate without consequence, food was able to stand in as entertainment, comfort, indulgence. Food plays so many roles in our lives, a lot of which lead us to choose unhealthy options.

"My relationship with food is I am learning to love it in a very restrictive way. I've realized 90% of the time, it's not so much that I’m hungry but maybe i’m just bored. Back in the day, I would eat  because there's nothing else to do or it would be a comfort thing.

"So I'm trying to disassociate a lot of those impulses from food. If I'm bored, I'm gonna maybe work on the script, or watch a movie or listen to music. Food doesn't always have to be the answer to make me feel better or make me feel comfortable."

Leaving comfort food behind him and appreciating food for their nutrition has set Javier on a culinary adventure, finding for the first time in his life healthy ingredients and recipes he never dreamed of enjoying.

"I used to think that healthy food was very bland and boring. Now I feel like I'm discovering almost a new type of food, where it's healthy and delicious and it's not the same thing over and over again. I'm being introduced to new foods.  I feel as if I’m finding a new land, it's such a huge discovery for me.

Javier is on the vegan meal plan but supplements with Beyond Meat® and chicken breast from our A La Carte menu.

"I have two vegan meals and those take up most of my carbs for my macros. I’m receiving free chicken for joining during the Black Friday giveaway so I'll include that with my meals. And then for dinner I have Beyond Meat that I eat with a vegan egg product."

"Time is going to pass regardless of what you do. So just make sure what you're doing now is going to count later on."

Javier's take on goals is to not set yourself up with rigid benchmarks or expectations but instead to focus on a strategy of steady progress. The most important thing is simply starting.

"In the beginning I tried not to give myself any sort of goal since I knew I probably wasn’t going to see the results of this until later. I just wanted to make sure that what I did was going to pay off later.

"It wasn't until the 90 Day Challenge started happening that I realized, ‘Well, you know what? I am seeing results.’ I realized I have enough discipline to sort of stick with this."

"I still want to lose another 35 to 50 pounds and be under 200 by the end of the year. And right now I'm on track to definitely make that goal. I've been introducing movement exercises, especially because the 90 Day Challenge encouraged a lot of that. I'm doing the Focus T25 and that's perfect for me. It's only 25 minutes and non-stop movement.

"I've been trying to keep as many things that I can on track. I actually ended up getting an Apple Watch just to keep track of the extra calories that I'm burning making sure I’m standing up. I’m at this point where I want to be cognizant of all these things that actually affect your health.

"It definitely had a compounding effect."

Trifecta doesn’t just provide meals, we educate our customers to develop lifelong eating habits that promote good health with or without Trifecta. By relying on Trifecta, Javier was learning to rely on himself. By tracking his macros and having the knowledge to react to changes in his body, Javier can eat with confidence.

I'm taking the habits that Trifecta implemented for me and applying that to the way I live everyday.

"For a long time I ate only Trifecta, like religiously. I had it three times a day seven days a week. When the 90 Day Challenge happened, I started using the Trifecta app to track my macros. Working with the app I was able to cut down my Trifecta meals and still know what macros I'm getting.

"Knowing my macros, I can actually still sometimes enjoy myself every once in awhile. You find ways of fitting a treat meal into my macros and me not fall off the wagon."

"I'm more conscious now when it comes to making healthy choices outside of Trifecta."

If you're ready to reimagine your relationship with food and start seeing the effects of a macro balanced diet, download our app and track your macros today!

The Trainer That Tries Everything, Tests Trifecta Clean Eating

After Grave's Disease, Kevin Reclaims his Life With a Paleo Diet

Is Soy Bad For You or Good? What the Science Says