Friend to all animals, lovers of plants, vegans run a masterclass in diet discipline. From an outside perspective, it seems the list of what vegans can’t eat or drink is endless. Vegans on the other hand, will tell you that bucking animal products along with conventional American cuisine opens up an entire world of flavor and creativity that meat eaters may never know.

Sooner or later though, regardless of how you eat, you’re going to crave something sweet. It’s just a fact of life.

Many of the reasons we avoid sweets today are what made sweets so critical in our past (1). Our bodies are naturally prone to seek out high digestible carbohydrate calorie foods and sugars are a jackpot.

In moderation, sweeteners can be essential, in the perfect recipe or as a treat at the end of the day.

Vegans, disciplined as they may be, don’t have to deny their sweet tooth just to stay on a vegan diet. These ten vegan sweeteners give a candied kick to breakfast, lunch, dinner or dessert.

What Makes a Sweetener Good or Bad?

Sweeteners have a bad reputation. What makes one sweetener more appealing than another is subject to several factors and ultimately up to the individual. All carbohydrates, including sugar, contain glucose and some contain fructose.

Some science suggests glucose and fructose affect the body in different ways- although, it’s not conclusive which is better or worse than the other overall. What's most important isn't which kind of sugar you're consuming, but how much.

In general, sugar intake should be carefully regulated, particularly added sugars which may contribute to diseases like obesity, type 2 diabetes, liver and heart disease (2).

Most added sugar comes from processed foods, so the best way to cut back you intake is to follow a whole foods plant based diet.

We know that any food made directly from meat, dairy, eggs is not considered vegan, but when we get down to sweeteners though, what is and is not vegan is less straightforward.

Yes, insects are animals too and eating the fruits of honey bees labor is off limits (4).

This one might surprise you. While white granulated sugar does come from the sugarcane plant, the way it’s processed, in America and elsewhere, does introduce animals into the equation. Part of the coloring process uses bone char made from pulverized cow bones.

The animal particles are then separated, but due to this step and possible contamination, refined sugar is not vegan. This also includes derivatives of white sugar including brown sugar and confectioner sugar.

However, according to PETA, organic cane sugar is considered vegan approved.

This one is rather obvious but worth noting. Condensed milk is cow’s milk with the water removed and typically sweetened with white sugar.

No vegan would mistakenly take a sip of the syrupy milk but it is common in baking and can be consumed unwittingly.

Vegan doesn't automatically mean healthy or nutritious. A vegan cupcake may fit into a vegan diet, but that doesn't make it good for you. You still have to pay attention to portion sizes and good nutrition, regardless of which style of meal plan you're following.

So while many of the following options are "vegan" they should still be consumed in moderation: 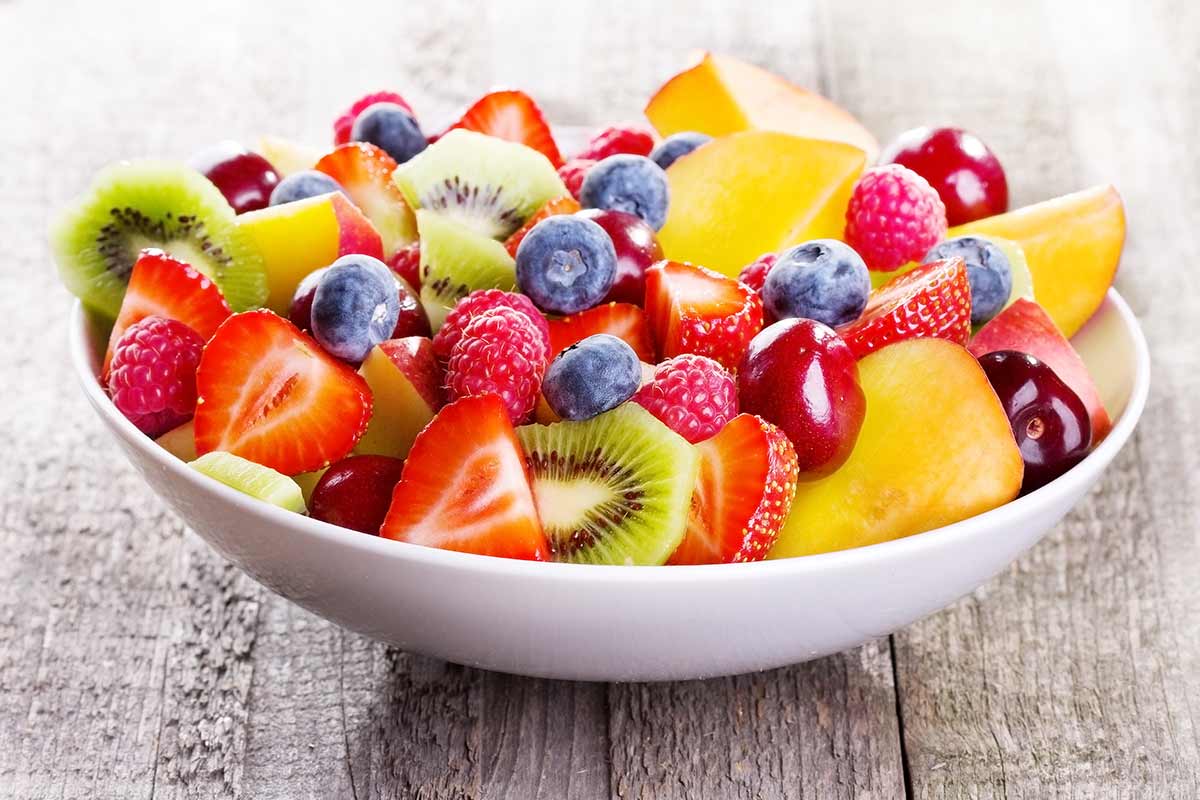 While not technically an "added sugar" fruit is commonly used to sweeten dishes.

“Can’t vegans have any fun?” you may be asking yourself, but fruit truly is the most nutritious and least harmful natural sweetener available.

Sugars in fruits like apples, bananas, pineapple and citrus are naturally occurring and, unlike added sugars, they are packaged in whole foods that tend to provide other essential nutrients as well - making fruit an excellent sweetener. Plus, fruit is delicious and we’re lucky to have such incredible variety (thanks to the bees we’re not stealing honey from).

Fresh fruit also includes the advantage of vitamins that a scoop of sugar just can’t claim. Get a load of them all (5):

Fruit can be enjoyed on its own, baked into vegan breads or baked goods, or reduced into a compote to complement a sweet breakfast or dessert. 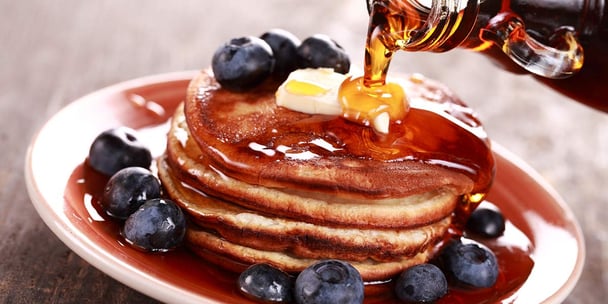 Maple syrup is a wild crop that is only found in New England, New York, Pennsylvania, Michigan and Southern Canada. Because sugar maple trees can’t be planted and farmed the way apples for instance are raised, this regional sweetener is both coveted and costly.

Produced by “tapping” live trees ahead of the spring thaw, harvesters collect the sap and boil it down to a sugary reduction. It takes 40 gallons of tree sap to make one gallon of syrup.

Maple ranks lower on the glycemic index than white sugar (6). Maple also contains several minerals like calcium (only in micro amounts), but its still sugar and should not be consumed for nutritional value.

An obvious choice at breakfast time, more and more plant based chefs are exploring the uses of maple in vegan recipes, from vegetable glazes to salad dressings. 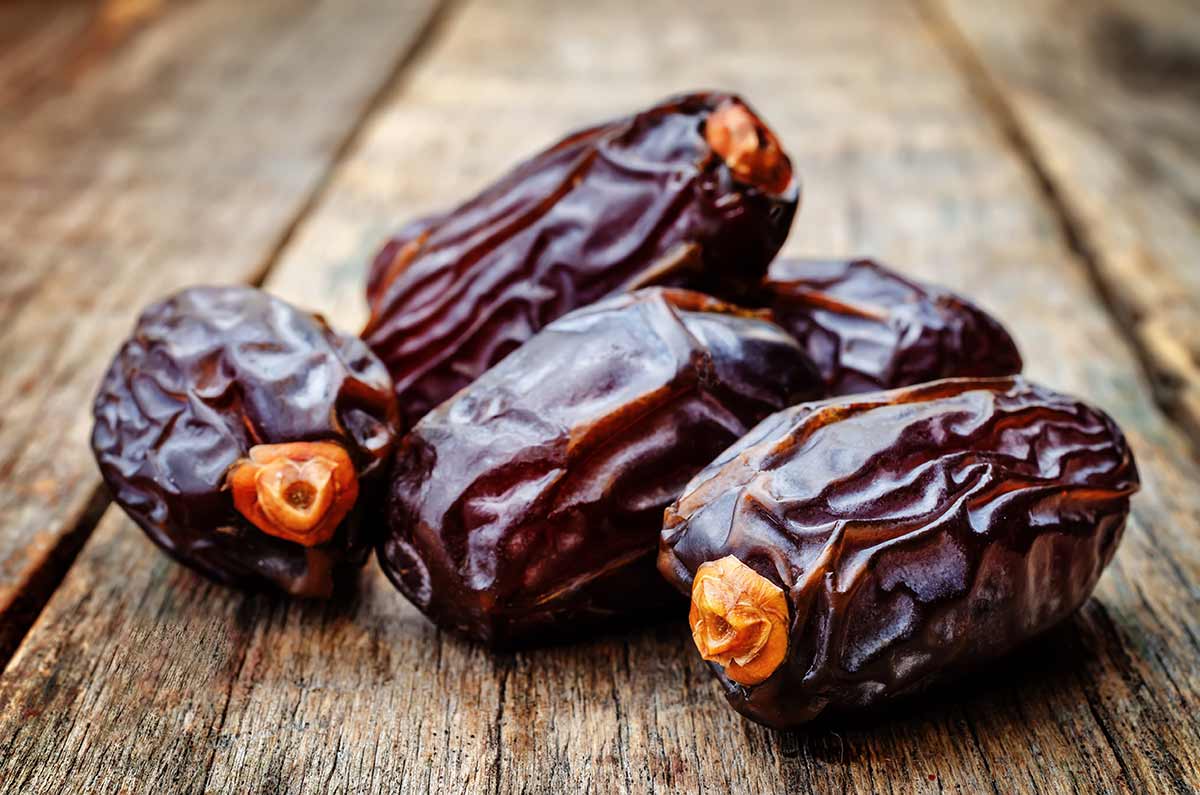 While dates are a fruit, date syrup deserves its own category based on the minimal processing involved to create it. Dried dates are chopped, boiled, pureed and strained to create a deep and flavorful syrup.

While whole dates contain natural nutrition, including fiber, date syrup removes most of this leaving you with a sugary, sweet date syrup - making it nutritionally similar to all other types of added sugar. 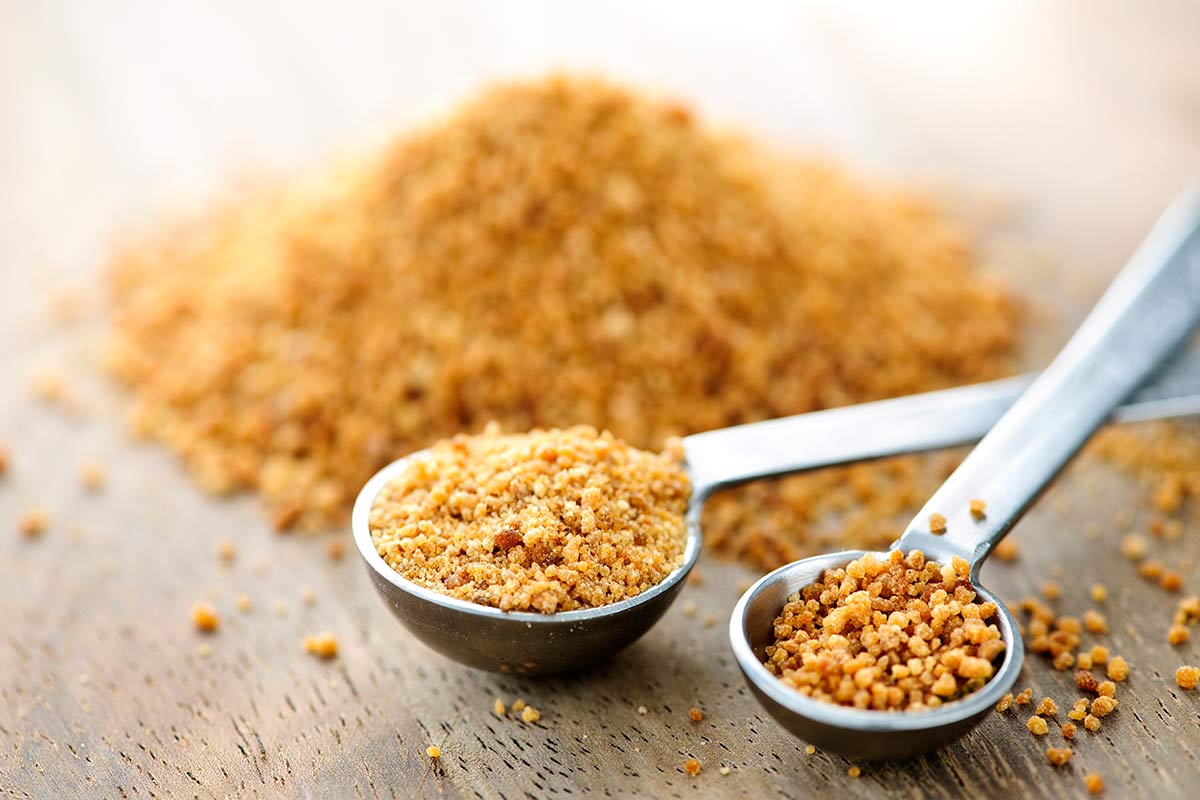 From the fruit that brought you oil, water, milk and flour, comes coconut sugar.

Unlike other coconut products, coconut sugar is made from the blossom of the the coconut palm flower by extracting the sap from the small clusters of buds and boiled to produce a crystalized sugar.

Coconut sugar is a natural sugar and ranks on the glycemic index comparative to an apple. The flavor mimics brown sugar and is excellent for baking.

Tequila’s innocent sibling, agave nectar is a product of the agave plant that grows in certain regions of Mexico. The desert succulent is harvested by pruning off the long spears of plant leaving a bulbous center that’s cut from its roots. The sap inside this core is boiled much like maple syrup, creating a concentrated sweetener.

This nectar is what makes agave appealing--you simply use less of it than you would sugar. Agave contains both more fructose and more calories than refined sugar (more than high fructose corn syrup too) and can be used sparingly to great effect (7). 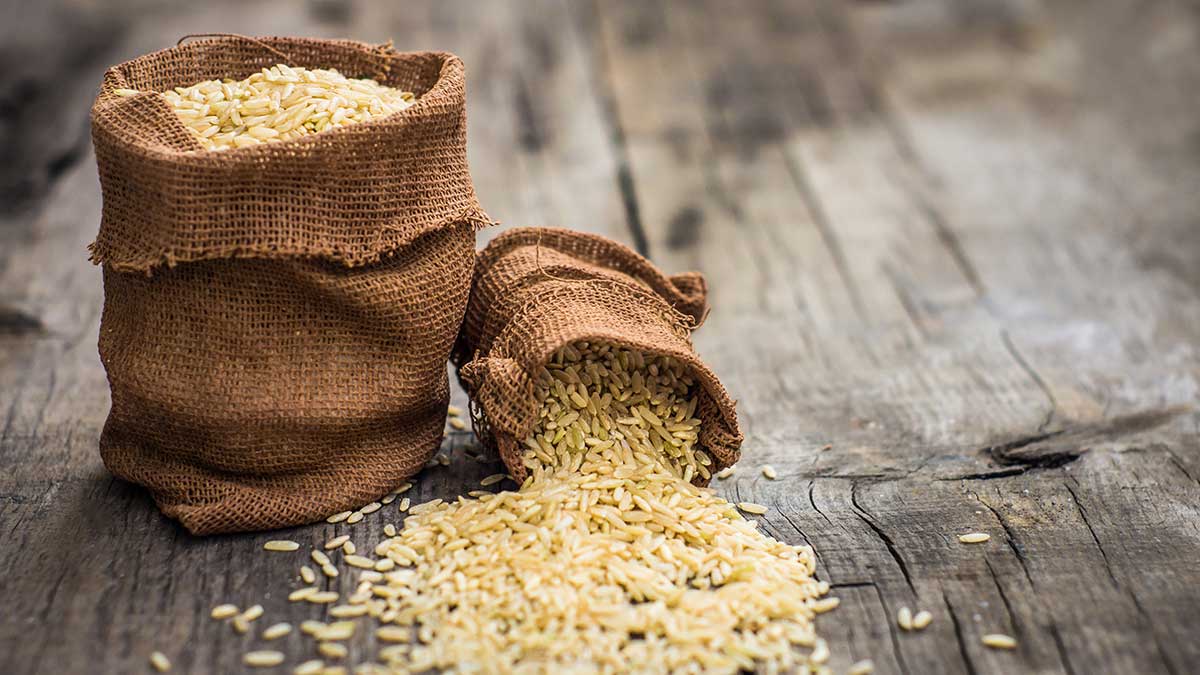 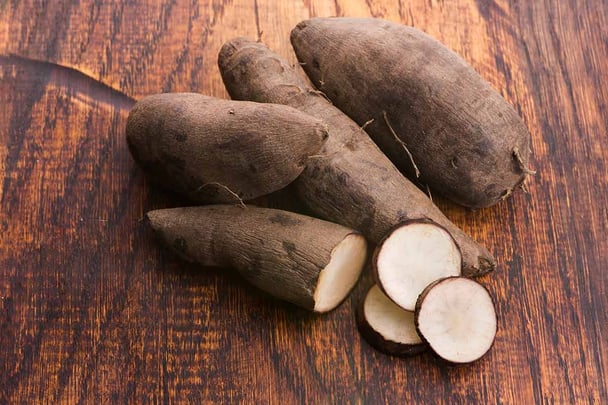 The yacon plant is a relative of the sunflower that grows in regions of Peru. The tubular roots contain sap that is extracted and reduced to a sweet syrup. Yacon root syrup is low on the glycemic index but also has a far less sweet taste than the other options on this list.

Because of that, you might find yourself using more of it and cancelling out the low glycemic benefits. 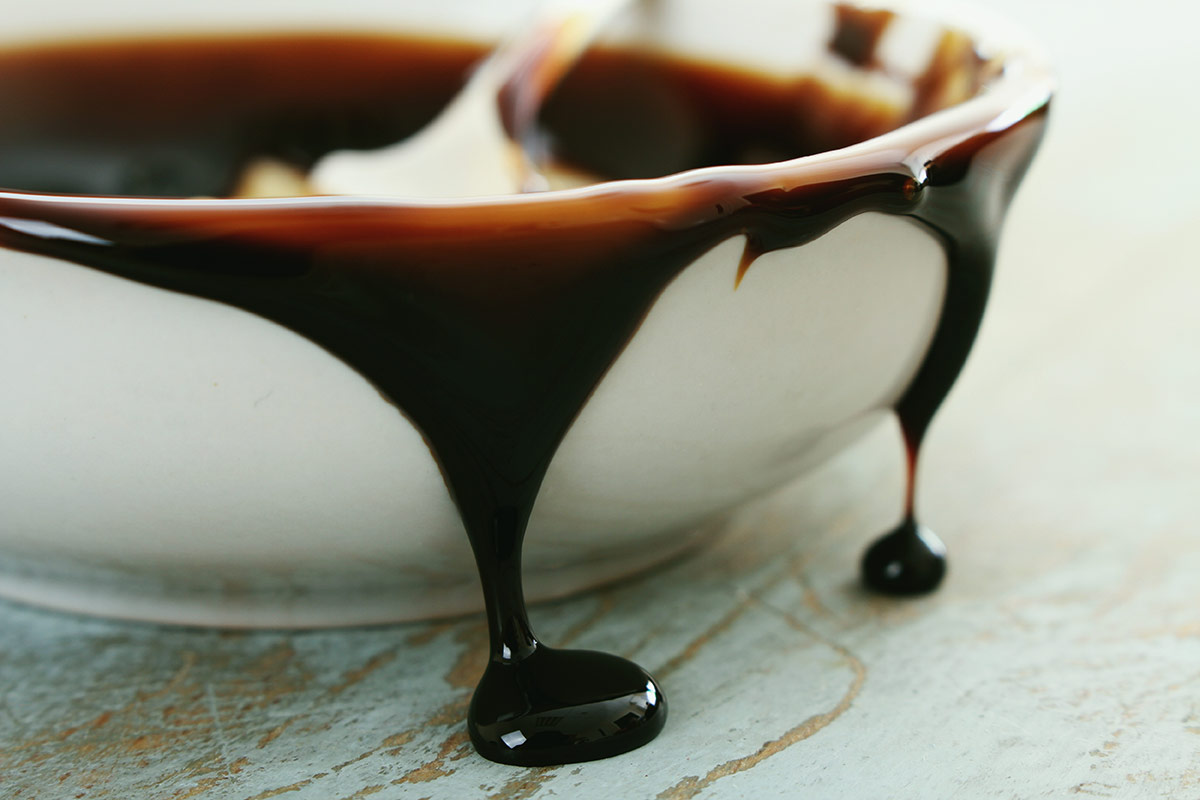 Molasses is a dark, flavor packed sweetener that comes from crushed sugar cane or beets and is technically a by-product of the sugar-making process.

Because molasses contains more of the sugarcane plant, it is actually one of the few sugars that has any notable nutrition - containing small amounts of magnesium, potassium, calcium and vitamin B6. However, it is still a high sugar food and should be consumed in the same fashion as other added sweeteners - in small amounts!

Molasses has a similar glycemic index rating as refined sugar so the only real difference apart from flavor is its vegan. 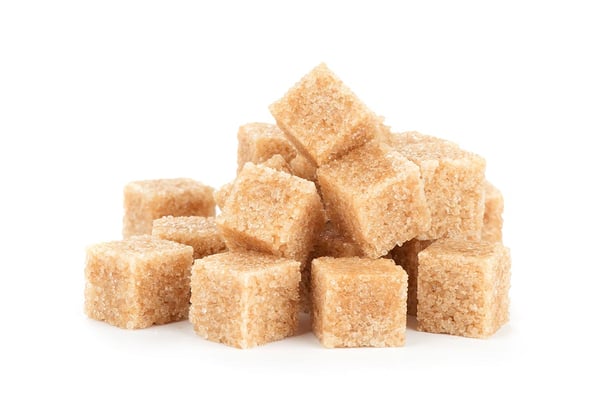 Raw sugar is is the "less processed" version of cane sugar - made from crystalized sugar from the sugarcane plant that has not been refined and therefore untreated with bone char.

Raw sugar will retain tiny amounts nutrition that is traditionally pulled out with the molasses in white sugar refinement as well as a natural light brown color. However, its is not a notable source of any key nutrients.

Flavor and sweetness is essentially the same as sugar so it can be substituted 1:1 in any recipe. 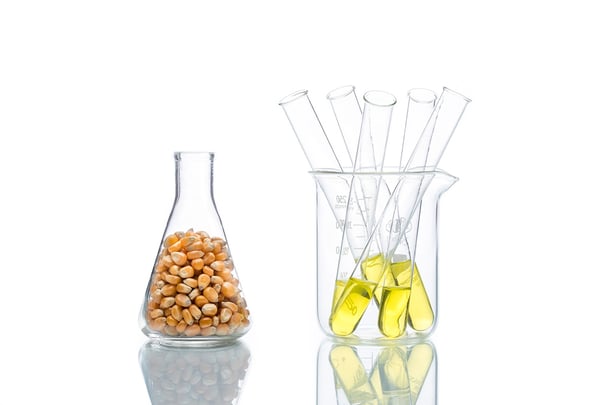 Found in almost any junk food from Coca-Cola (vegan) to Oreos (also vegan) corn syrup is a sugar derived from corn starch. You can also use this plant based sweetener for homemade recipes.

Similar to brown rice syrup, corn syrup practically all glucose while high fructose corn syrup undergoes a process which converts some of the glucose to fructose (8).

The stevia plant is a member of the chrysanthemum family. The stevia you’ll find on your grocery store shelves isn’t. Stevia brands like Stevia in the Raw are made from REB-A, a glycoside extracted from the stevia leaf that is 200 times sweeter than sugar (9).

Additional sweeteners may be added as well. So while there’s almost no actual stevia in stevia products, they also have zero calories and can be an preferable sweetener if you’re trying to lose weight or cut calories (10).

Glycemic index (GI) is a ranking system for sugars that helps you see what their impact on your blood sugar might be.

Here's the breakdown of glycemic index for common vegan sweeteners. 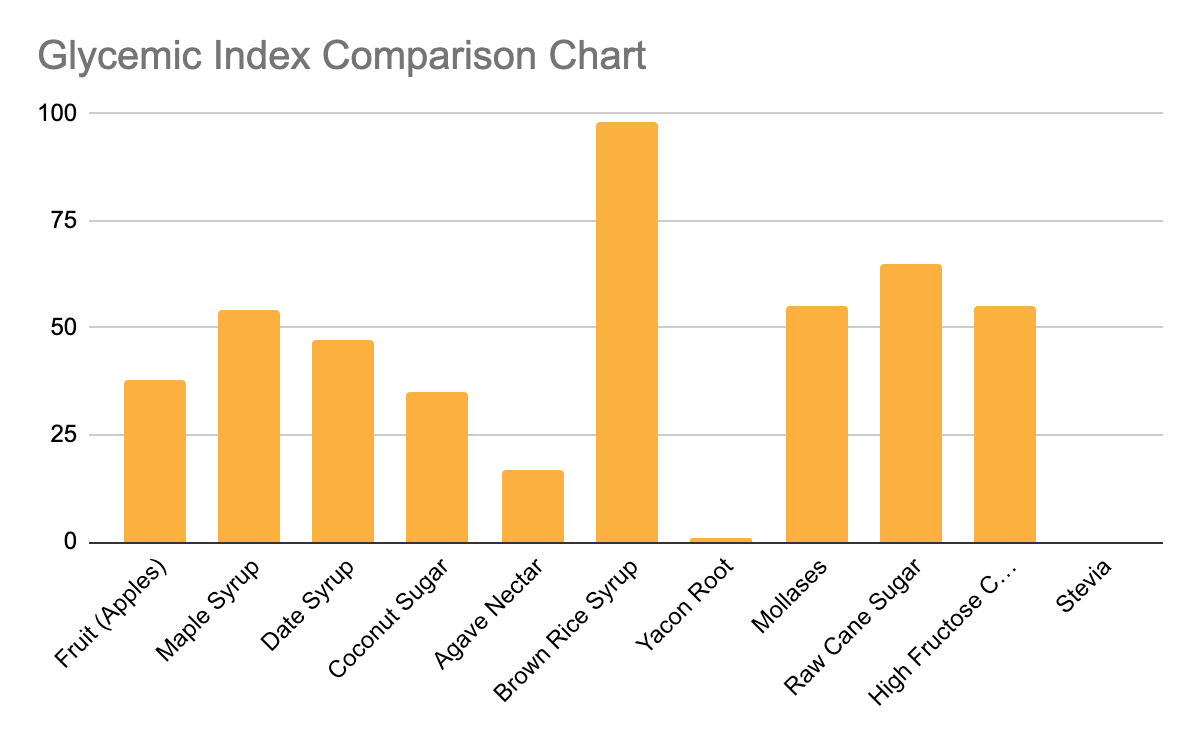 Keep in mind this is only one piece of the puzzle. The glycemic index scale doesn't take into how much of the sugar you eat or whether or not it is eaten with other food - both of which can strongly impact your blood sugar response.

A little bit of sugar can still fit into a healthy lifestyle without harming your health or nutrition - its all about balance!

Whether you're a seasoned vegan or just getting started, Trifecta offers free tools to get the most out of your diet.

Download this free meal prep toolkit for vegan diets! This RD-written guide provides step by step instructions for planning vegan meals to help you lose weight and improve your health.

Holiday Weight Gain: Getting Back on Track After Holiday Eating

Muscle Gain & Weight Loss Meal Plans: What Diet is Best For Me?