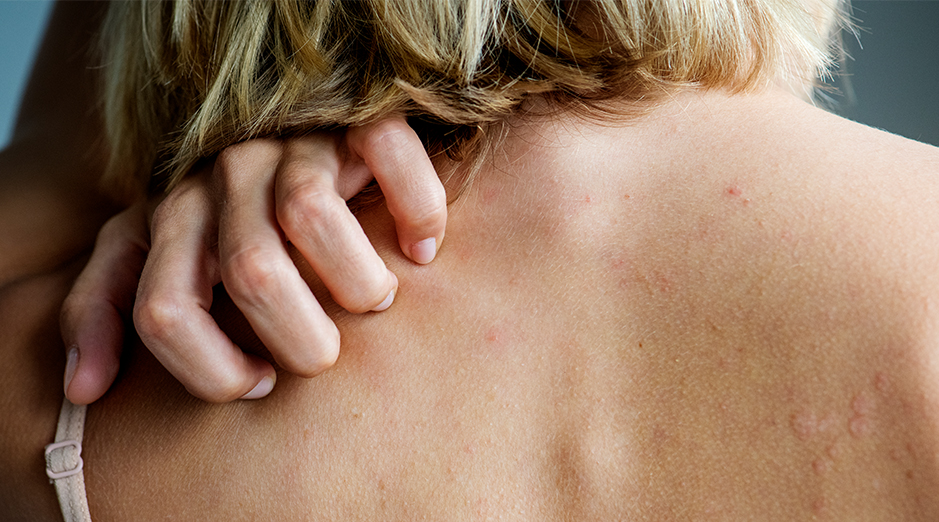 One way that the body can respond to gluten is by plaguing people with a chronic red and intensely itchy skin rash, called dermatitis herpetiformis (DH).

And yes, the name does sound kind of like herpes. But don’t worry. It’s not. Nor is it contagious!  But the rash can cause significant discomfort in people who are affected with this condition.

Thankfully, getting rid of gluten can make it all go away.

What is Dermatitis Herpetiformis?

Similar to celiac disease, dermatitis herpetiformis is caused by an autoimmune reaction to gluten. Gluten is a protein found in grains like wheat, rye, and barley.

The disease is characterized by a skin condition that looks like small red bumps most frequently found on the elbows, knees and buttocks. While it predominantly presents on these extensor surfaces, the rash can also extend to the back, face and many other parts of the body.

These raised bumps that are characteristic of the disease often occur in an eruption of clusters with itchy blistering. The manifestation of the lesions can vary some however they are often referred to as being 'vesicular'. They can also be described as 'papulovesicular' in order to describe the mix of  papules and vesicles that are often present.

However, both people with celiac disease and  DH both respond to a strict gluten free diet (1).

The DH disorder is also sometimes called Duhring's disease. Other people who feel better on a gluten free diet but don't have celiac disease or DH are said to have non-celiac gluten sensitivity.

The DH rash can be quite extensive. Because of this, the appearance of the rash alone bothers most affected people. Let’s be honest, no one chooses to be covered in a rash!

The main physical symptom that bothers people with the disease is itching. The constant intense itching often isn’t improved enough with medication and it can be tormenting.

As mentioned above many people with dermatitis herpetiformis also have celiac’s disease. Therefore these people can also have all of the symptoms associated with celiac disease including abdominal discomfort, weight loss, malnutrition, anemia and more.

Just like celiac disease, DH is an autoimmune condition that is caused by gluten. This means that the immune system starts to have problems when gluten is eaten. The immune system is usually a good thing. It helps us fight off infections and keeps us healthy.

In autoimmune diseases, the immune system goes awry and attacks part of its own body. The damage caused differs depending on what part of the body it targets.

In celiac disease the target of the immune system is the intestine. In DH the target is the skin. Both of these conditions are due to this inappropriate immune response.

Diagnosing DH may involve both blood tests and skin biopsies.

The blood tests for DH are similar to the ones used for diagnosing celiac disease. These include tests for an immune component called immunoglobulin A (IgA). These IgA antibodies are more specifically called IgA tissue transglutaminase antibodies and IgA endomysial antibodies.

Dermatologists (skin specialist doctors) often make the DH diagnosis. If you’re in the department of dermatology, they may take a small piece of your skin to be carefully analyzed through a skin biopsy.

This skin biopsy procedure is very safe and fairly pain free. About 4 millimeters of skin is needed and taken through what’s called a 'punch biopsy'. They then look for certain components of the immune system (ie:  IgA deposits and neutrophils). If these are present, it is very likely the diagnosis is DH (2).

How Common is Dermatitis Herpetiformis?

Thankfully, DH is not very common. While different sources on the prevalence can vary, it seems to affect about 10 out of every 100,000 people per year. DH is more common in men. It also seems to be more often found in middle age people and those of northern European descent  (3, 4).

Bottom Line: Because this condition is so rare, most itchy rashes are not dermatitis herpetiformis.

There are a lot of conditions out there that cause a red and itchy rash beside DH. In fact, there are so many causes of skin conditions that dermatologists go through years of training to specialize in just skin. So if you have something questionable on your skin, make sure that you are seeing a doctor to determine the cause.

To treat DH effectively all you need to do is get rid of the gluten in your diet. This almost always results in long term resolution of symptoms.

The bad news is that changing up your diet alone doesn't always give the fast relief most people are looking for.

Luckily, there are medications that can help the rash resolve more quickly. People often don’t tolerate Dapsone or some of the other medications used to help treat dermatitis herpetiformis very well due to side effects. This is all the more reason why it is very important to have a confirmed diagnosis by your doctor before getting involved with any formal treatment.

Balancing a healthy diet while living gluten free can be a challenge for some - especially if your diet requires strict elimination of all things gluten. Luckily there's a number of gluten free meal delivery companies offering a wide variety of gluten free meal plans. In fact, all of the meal plans at Trifecta are gluten free.  And even better, all the food comes already made - no cooking needed.