The mysterious nature of celiac disease can make it challenging for even doctors to diagnose. Celiac disease is caused by an autoimmune response  that can wreak havoc on the intestines. It leads to serious health problems including malnutrition, chronic pain, and weight changes.

The good news is that once you're diagnosed, the treatment is simple (although admittedly not always easy).  All you have to do is change your diet.

Here is your guide to celiac disease: why it results in damaging the body, what celiac symptoms look like and how the disease responds to treatments that are focused on dietary modifications.


What is Celiac Disease?

People with celiac disease have an inflammatory digestive disorder caused by damage to their intestines that happens when they eat gluten.

Gluten is a protein found in wheat and other grains including barley and rye.

You may also hear it referred to as 'celiac sprue' or 'gluten-sensitive enteropathy'.

Exposure to gluten causes an immune mediated reaction resulting in inflammation and damage to the gastrointestinal tract that interferes with the absorption of important nutrients.

If left untreated, celiac disease can have dramatic health effects.

Each person can become affected by the condition in different ways. This means it may be hard for many people to know if they even have the disease.

This has led to the creation of different groups within the diagnosis (1). These classifications include classic celiac, atypical celiac, asymptomatic or silent celiac, and latent celiac disease. Some people who test negative for celiac disease but still feel badly when they eat gluten are said to have gluten intolerance (aka non-celiac gluten sensitivity).

Many symptoms of this digestive disease are caused by the intestines impaired ability to absorb vitamins and other nutrients.

Some people with celiac disease (10-15%) also have a terrible itchy rash, a condition called dermatitis herpetiformis.

The effects of classic celiac disease include nutrient deficiencies, weight loss, and damage to the intestine tract. These symptoms resolve with removing gluten from the diet.

But not everyone falls into this textbook definition. Different people seem to tolerate gluten in a variety of ways.

Atypical celiac disease includes those that often only have minor symptoms - and these can be nonspecific.

For example, unexplained anemia (low blood counts) may be due to atypical celiac disease, even though the person may be of normal weight without any other symptoms. These individuals may also have mild symptoms that occur at different times and range in how severe they are.

These symptoms also respond with dietary modifications that involve the elimination of gluten.

In silent celiac disease, people don’t have symptoms - or at least they don’t seem to be aware of them. Yet they still have similar intestine damage that resolves when removing gluten from their diet. These individuals are often diagnosed when doctors are working them up for unrelated problems and unexpectedly find patterns consistent with the condition.

Latent celiac disease may provide some hope for people who just love gluten. One study found that as many as 20% of children diagnosed with celiac disease were later able to reintegrate gluten back into their diet without any problems (2)!

Unfortunately, this may be more rare than this one study suggested as other research shows the majority of people continue to have a negative reaction to gluten throughout their entire lives as adults.

Celiac disease is an autoimmune condition that is triggered by eating gluten containing grains, such as wheat, barley and rye.

But what does this mean?

The immune system can be thought of as your body’s military that among other roles helps to fight off infections. And this defense system is usually a good thing!

Examples of other autoimmune disease include type 1 diabetes and lupus. 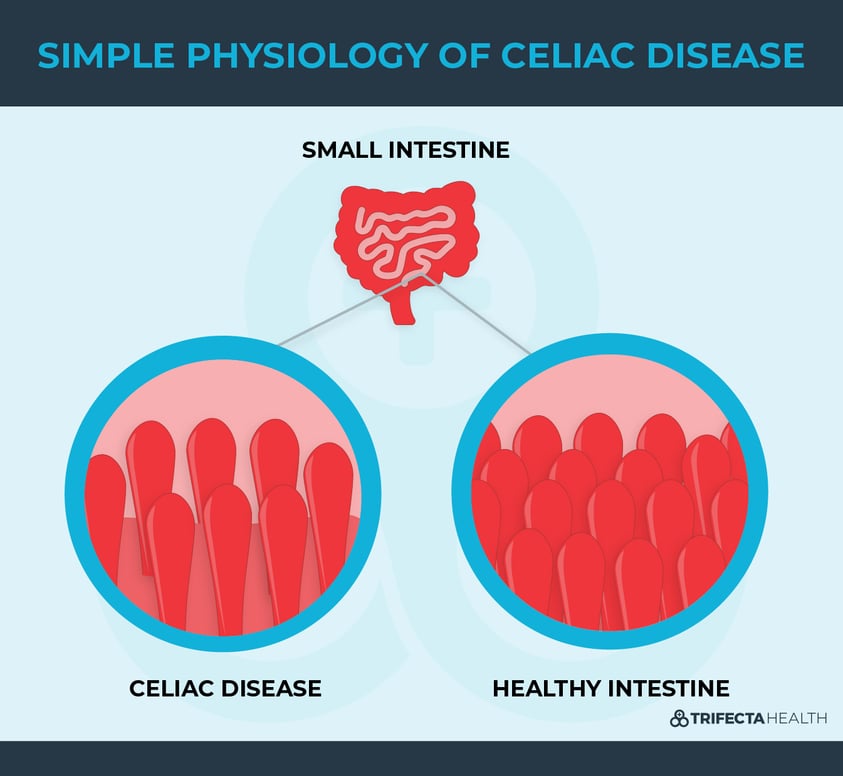 What happens when the small intestine is damaged?

The intestine is in charge of taking nutrients out of the food we eat into the rest of our body for use. Specifically, there are many parts within the mucosal lining of the small intestine called ‘villi’ that help these nutrients to be absorbed.

When people with celiac disease eat gluten, the immune system damages these villi and other parts of the intestine. This makes it harder for these affected individuals to absorb nutrients.

This puts people with celiac disease at a higher risk of developing various nutrient deficiencies. It can also cause abdominal pain and the other disease symptoms.

How Common is Celiac Disease?

Celiac disease affects millions of people throughout the world. The exact prevalence is not known and varies in different regions between 0.7% and 2%

Celiac disease affects about 1% of Americans in the country.

This variability can be largely blamed on the fact that diagnosing the disorder can be both challenging and involve invasive procedures. This means that it can be difficult to tell exactly how many people are affected in very large populations and it may be under-diagnosed in some regions (3, 4).

Diagnosing celiac disease can be tricky and can involve a variety of tests - some of which are invasive.

Many people start with a blood test. If the suspicion for celiac disease is still high, doctors may take a piece of your intestine called a bowel biopsy. Most of the time this is enough to diagnose celiac disease.

Parts of the immune system called antibodies can help with diagnosing autoimmune disorders. The most frequent blood test used looks for something called IgA antibodies.

Unfortunately this test isn’t always perfect. So if celiac disease is still suspected despite a negative test, there are other parts of the immune system that can be tested. While these blood tests are often positive in people with celiac disease, they can also still be negative - especially if you've been following a strict gluten-free diet.

If celiac disease is strongly suspected and blood tests are negative, people are sometimes asked to start eating gluten again for a period of time and then have these tests repeated.

The other common diagnostic tool is a small bowel biopsy. This involves a doctor using a small camera to look down your throat into your small intestines and take a piece for further investigation. Some of the things they look for in this sample are IgA deposits.

Small intestine villi are classically destroyed in the disease. A video capsule can be used to look closer at parts of the intestine that are too far for a traditional camera to reach. And yes, this is exactly how it sounds. A tiny video camera is swallowed and as it passes through your body it shows your doctor what your intestines look like.

Unfortunately, it is also possible for intestines to look like they’ve been damaged by celiac disease but the destruction may instead be due to other conditions such as Crohns disease, malnutrition, or a variety of other autoimmune diseases.

This is why it's important for doctors to have many different pieces of information in order to solve this puzzle.

Celiac disease can run in families. And another way to test for celiac disease is to look at your DNA. In confusing cases, clues may be found genetically.

Part of our genetic code called HLA DQ2/DQ8 has been strongly associated with the disease - and it may predispose people to the condition (5).

Bottom line: the diagnosis is complex. A combination of blood tests, small bowel biopsy, symptom presentation, and genetic testing may all be utilized to determine whether or not a person has celiac disease.

Some people still feel like their bodies don't respond well to gluten even when all of these tests are negative. This condition is often referred to as gluten intolerance.

Once the diagnosis is made the treatment sounds simple: just change your diet. But strictly eating foods without gluten to treat celiac disease can be challenging.

Properly managing the disease requires being dedicated to eating only gluten-free products.

While long term damage can be present in severe cases, symptoms of celiac often improve within a few months after proper diet modifications.

However, despite the flood of gluten-free food marketing, it can still be difficult to maintain a gluten-free diet while getting all the nutrients you need. Dietary education is key.

Take the stress out of balancing your health and appetite with a variety of pre-made gluten free meal plans delivered each week. Let our 100% gluten free kitchen take care of the shopping, planning, and cooking, so you can rest easy and spend your time where it matters most.