Diabetes Tests and Diagnostics: What Do My Numbers Mean?

Diabetes has become the most common preventable disease in our society today. Because the symptoms of diabetes can be mild or even absent, tests performed by your doctor are the only way to ensure you are not developing diabetes or prediabetes.

Tests used both in the office and at home are important tools in the diagnosis and daily management of diabetes.

How to Test for Diabetes

Tests needed for the diagnosis of diabetes will be done at your doctors office. You may need to fast overnight before having these blood tests performed.

HbA1c is a test that shows what your average blood glucose has been over the previous 3 months.

This is an important test because not only is it diagnostic of the disease but it helps to track progress of treatment.  A lower HbA1c means that there has been consistent improvement in glucose control. In type 2 diabetics a normalized HbA1c combined with a normal fasting blood glucose can indicate resolution of the disease. 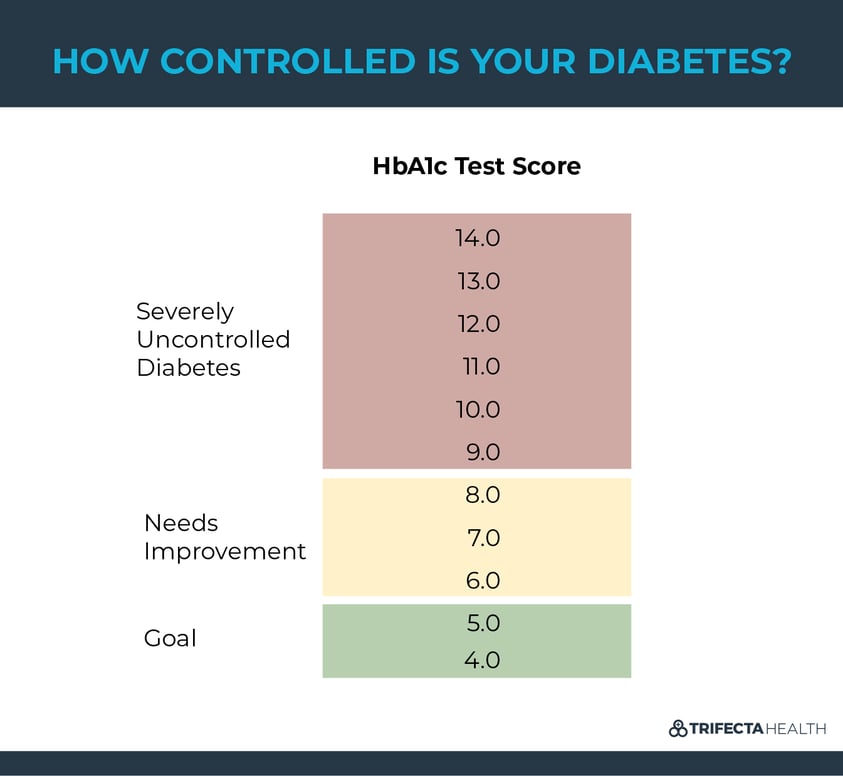 The criteria for diagnosing diabetes includes:

2. Glucose >200 mg dl without fasting with symptoms of hyperglycemia

The glucose challenge test is a special exam for identifying diabetes in pregnancy. When a woman becomes pregnant she releases all sorts of hormones to support the baby growing inside of her. Unfortunately, some of these hormones make it harder for her body to process glucose, and thus put her at risk for developing a type of diabetes in pregnancy, called gestational diabetes.

Identifying gestational diabetes is so important because the disease can be very dangerous for both the mother and the baby she is carrying.

These complications can almost always be prevented by carefully managing the disease throughout pregnancy. Every pregnant women should be evaluated for gestational diabetes.

Medical testing isn’t usually expected to be ‘do it yourself’.

But diabetics need to become experts at checking their own sugars and sometimes their own urine in order to effectively manage their disease.

The two main tests utilized at home in people’s everyday lives are blood glucose and ketones.

The mainstay test in diabetic care management is blood glucose. The overall goal is to keep blood glucose as close to normal as possible (70-140) and minimize any major fluctuations in sugar.

Type 1 diabetics should check their blood sugar at least 4 times daily including  before meals and before going to sleep. This is because they are susceptible to rapid changes in their sugar based on their activity level, what they eat, and how much insulin they take. Their glucose measurements determine how much insulin they should give themselves and help to ensure their glucose levels aren’t getting too high or too low.

Type 2 diabetics should also check their glucose, but the frequency depends on how advanced their disease is. Some advanced type 2 diabetics who are now dependent on insulin may need to check their sugars as frequently as those with type 1. Others who develop type 2 diabetes and catch it early can be largely diet and exercise controlled. Their doctors may recommended that they have close follow up with only glucose checks at their doctors office.

How to Check Your Blood Glucose

Anyone on insulin or oral medications that can cause hypoglycemia should be aware of the symptoms of hypoglycemia and be able to regularly check their sugars.

You can check your real time  glucose using a small portable machine called a glucometer. You prick yourself with a tiny needle included with the kit and place a drop of blood on the testing strip which is then entered into the glucometer to read your blood glucose.

Blood glucose can be dangerous if it is either too low or too high. 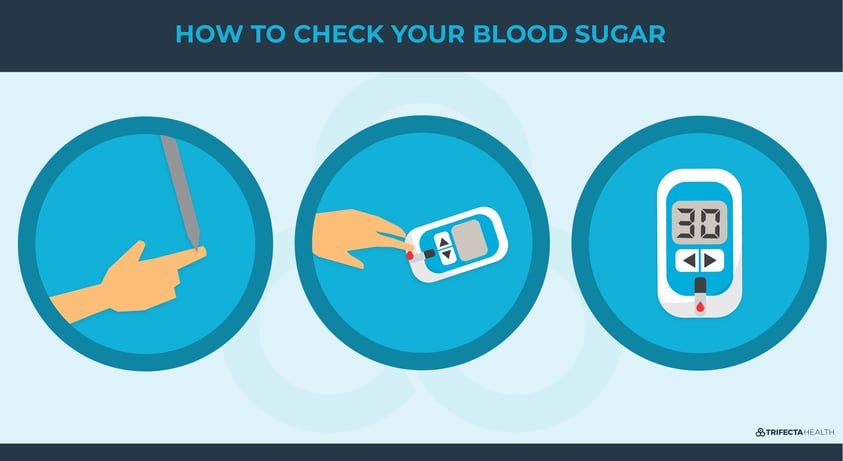 If your blood sugar is too low, you are said to have hypoglycemia. Hypoglycemia in diabetics is most often caused by medications, such as insulin.

While your body does have the potential to get energy from other sources (ie: glycogen), this process takes time. A fast drop in blood sugar that doesn’t allow your body the time to make more glucose can be very dangerous.

It’s therefore important to recognize the symptoms of hypoglycemia, so you can treat it early to prevent dangerous consequences.

If your blood sugar is too high, your are said to have hyperglycemia. People with diabetes by definition will have high blood glucose levels if they’re not being actively treated. The goal is to lower blood sugar into a normal range through diet, exercise and medications, if they are prescribed.

People on insulin check how high their current blood sugar levels are to determine how much medicine they should be taking.

Ketones (aka ketone bodies) are the result of fatty acids being used for fuel when there isn’t enough glucose available to the cells.

In diabetics, ketones can represent a dangerous complication called diabetic ketoacidosis (DKA) as ketone levels can rise when there isn’t enough insulin present. Other factors can stimulate the  presence of ketones including excessive alcohol use, the ketogenic diet, and starvation.

Ketoacidosis most commonly occurs when people don’t take their insulin when they should. Other frequent triggers include infections and other major stressors on the body such as heart attacks.

People are encouraged to test their own ketones if they have early symptoms of DKA or very high blood sugars. This is especially true for people with type 1 diabetes and advanced type 2 diabetes as they are at a higher risk of developing DKA.

Diabetics who test positive for ketones should always be further evaluated by a doctor to make sure they aren’t in diabetic ketoacidosis.

How to Check for Ketones in Urine

Checking your urine for ketones is the most common way of checking for ketones. It’s easy and inexpensive. Test strips can be bought at almost any pharmacy or drug store and simply involve, well - peeing on a stick. Color changes on the stick indicate if ketones are present, and about how many.

While glucose in the urine (glucosuria) is a common finding in diabetics, it is not always an accurate diagnostic test and it also doesn’t influence immediate treatment.

Ketones can also be checked by blood tests (similar to a blood glucose testing strip) as well as by breathalyzers. 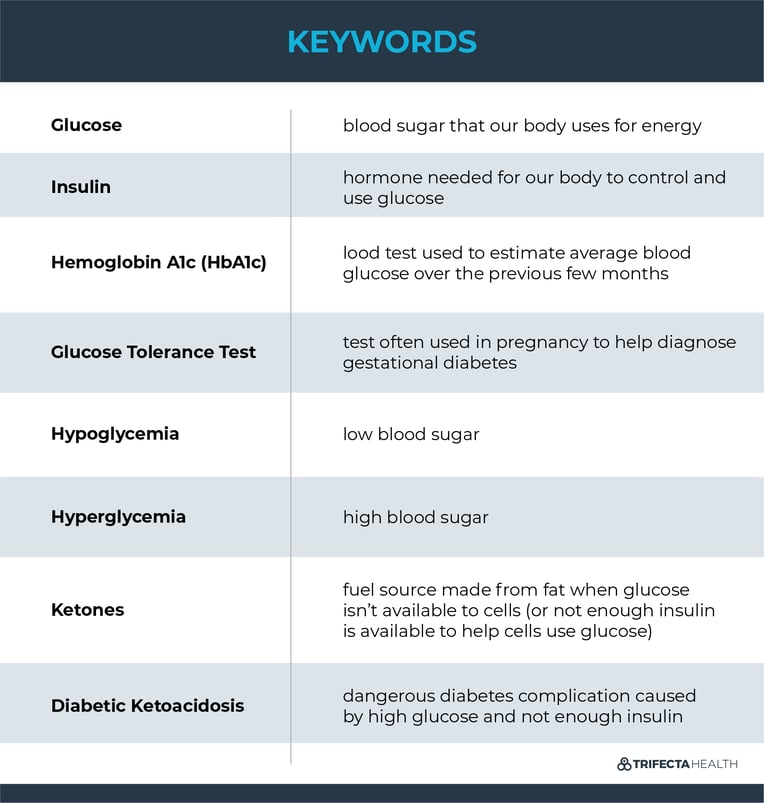 Sometimes it’s difficult to determine which type of diabetes a person has. There are additional  blood tests that can help with sorting out type 1 from type 2 diabetics.

Because type 1 diabetes is an autoimmune disease, parts of the immune system called antibodies can be used to help differentiate it from type 2 diabetes. In specific, antibodies against the pancreas (GAD65 and IA1 and ZnT8) have been associated with type 1 diabetes.

Unfortunately these are only present in about 70% of people with type 1 diabetes. This means that just because these antibody tests are negative, the diagnosis of type 1 diabetes can’t necessarily be excluded (1).