Paleo vs. Keto: What Is The Difference?

While both keto and paleo are low-carb diets that may seem structurally similar, the big thing to remember is the end objective of these diets. The keto diet heavily focuses on hitting specific macronutrients in order to force the body to burn fat as the main source of fuel instead of carbs. The paleo diet preaches a totally different mindset. Instead of thinking about what your specific macronutrients are and focusing on hitting a very specific number, the paleo diet focuses on a very straightforward principle - eat as your paleolithic (caveman) ancestors would have.

But which one is right for you? Here’s the breakdown of these two popular diet trends and how to figure out which is best for you personally.

What is the Paleo Diet?

The paleo diet (Paleolithic diet) emphasizes the intake of only foods that were available to our hunter-gatherer ancestors - also commonly referred to as the caveman diet.

The concept of paleo eating stems from the belief that our DNA has not changed much since our caveman days so our diet shouldn't change either. However, the research supporting the elimination of all processed modern foods for positive health benefits and weight loss is not that clear cut (1).

What is the Keto Diet?

Originally intended to treat seizures in children with epilepsy, ketogenic lifestyles have gained popularity as a tool against fat loss because of its unique effects on your metabolism. Its favorable impacts on blood sugar have also made it a popular choice for diabetics.

The keto diet (ketogenic diet) is a very high fat and extremely low carb meal plan designed to force your body into a state of ketosis - allowing you to use fat more efficiently for energy (2).

While no foods are forbidden on keto, ketosis can be achieved by following strict macronutrient goals and strategic meal planning. And this transition in metabolism is often accompanied by short term side effects commonly referred to as the keto flu.

How Are They Similar?

While intentionally very different, both lifestyles promote lower-carb eating, restrict grains, and include plenty of meat and fish.

Keto is one of the lowest-carb diets you can try - restricting your carbohydrate intake to less than 5% of your calories or less than 20 grams of net carbs for most.

Paleo is not intended to be a macro focused diet, but because of the limited sources of carbohydrates allowed, it is often defined as a low-carb diet. When following a balanced paleo meal plan, your carb intake would fall somewhere around 25% to 35% of your daily calories.

Paleo by definition means free from all grains, beans, and legumes.

Technically no foods are restricted on a keto diet as long as you hit your daily macro goals. Although, restricting your consumption of higher carb foods like grains, bread, potatoes, and starchy vegetables can make hitting your keto carb goals a bit easier - meaning, keto by default is “grain-free” and "bean-free".

Increased protein intake occurs naturally as the result of the types of foods you consume on each plan.

The hunter-gatherer lifestyle included high amounts of meat and fish and in most paleo meals this makes up the center of the plate.

Keto is not typically intended to be higher protein, but meat and fish are quality low carb keto proteins that can support your goals.

What is the Difference Between Paleo and Keto?

Both diets differ when it comes to the foods you can eat, your required macronutrient balance, and ultimately how each is intended to function.

There are very strict guidelines for what is considered a paleo-approved food and was is not and it is not always determined by entire food categories. For example, white potatoes are excluded whereas sweet potatoes are allowed. And healthy fats like olive oil are included while processed and refined vegetable oils are prohibited.

On the other hand, keto has few food restrictions when it comes to the type or the quality of what you can eat. Success solely depends on hitting your keto macros.

Paleo sets high standards for the quality of the foods you can choose. All proteins should be grass-fed or sustainably-caught, organic ingredients are preferred, and most processed foods are avoided. Because of these guidelines, paleo naturally encourages plenty of healthy foods.

Keto doesn’t have set guidelines for the quality of your food choices. Even though some people choose to follow a whole foods keto diet, it is isn’t designed to eliminate processed foods. Many people will still choose to eat processed meats, cheese, and other high-fat foods to hit their macros. Because of this, if you aren’t paying attention to your nutrition intake, keto can lead to higher intakes of saturated fats, low fiber intake, and poor nutrition overall.

Because of the tight carb limits, keto is basically sugar-free - with the exception of artificial sweeteners which can be heavily consumed by keto dieters.

Paleo, on the other hand, does allow for certain sugars like maple, coconut sugar, and honey.

With the exception of milk, dairy is highly celebrated on a ketogenic lifestyle because of its high-fat content and little carb count.

With paleo though, all dairy is forbidden. This is a major difference between the two plans.

The paleo diet focuses on what types of foods you should be eating versus what your macro ratios should be.

On the opposite side of that is the keto diet. The keto diet focuses on hitting specific and extreme macronutrients so that you can force your body to use fat as energy instead of carbohydrates.

Additionally, even though both styles of eating reduce carb intake, their overall macro focus is widely different.

The average breakdown of macros for each plan is as follows: 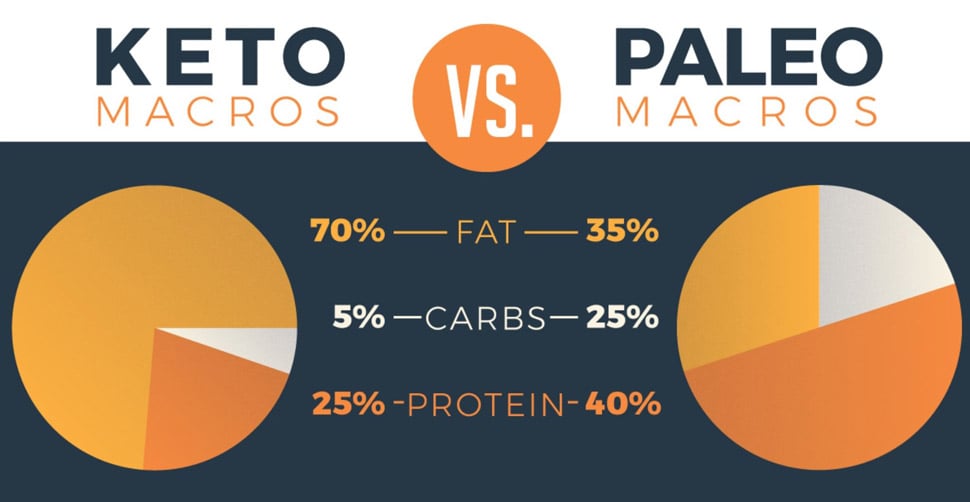 The end goal of keto is ketosis, whereas paleo is mainly intended to improve your food intake and digestion. These are drastically different intentions.

Regardless, when keeping nutritional balance in mind, both plans can be used to lose weight and improve your health.

Which Diet Has Better Results?

When it comes to diets, the primary objective for most people is, "What will help me lose the most weight?" However, the answer to that is not as clear as you may want it to be. People lose weight differently and there is no one-size-fits-all diet that can lead to the same results for everyone. Here is what we can tell you about both of these diets.

1. As long as you control your calories consistently you will lose weight.

Low carb diets often lead to quick weight loss initially (3). However, sometimes this is due to changes in water weight - since storing carbs requires roughly 2 to 3 grams of water per gram of carbohydrates.

Many people believe that if you force your body to use fat as energy, naturally, you will lose more fat stores. However, ketosis includes using the dietary fat you consume for energy. And if you are eating a lot of calories, your body won’t need to tap into your body’s fat stores as much - putting a damper on weight loss and sometimes leading to weight gain.

This also goes for paleo - you won’t lose weight just by changing up your food choices unless those changes result in fewer calories consumed.

Currently, we don’t have any research to indicate ketosis or reducing carbs outweighs the need for calorie control. And in order to lose weight on keto or paleo, calorie control is still crucial (4,5).

2. Being too restrictive can do more harm than good.

Overly restrictive diets do not often lead to sustainable results. And both paleo and keto can feel restrictive depending on the person because they eliminate entire food groups and follow strict guidelines.

The best rule of thumb to follow when dieting is not "How can I lose the most weight as quickly as possible?" but rather "How can I change my lifestyle to lose weight and keep it off long term?"

This means choosing the plan that you feel like you can stick to.

Another strong consideration is food preference. If you don’t enjoy what you are eating, it is unlikely you will keep at it.

If you enjoy the types of food on keto and won’t miss the carbs, this may be the right fit for you,  but if you don’t prefer higher fat and are looking for more of a meat and veggies approach, try paleo.

Choose the diet you believe will be the most sustainable long term - think of it as a lifestyle change. Would you prefer to eliminate carbs and focus more on satiating fats and proteins? Or would you prefer to simply get more whole foods in and follow a generally healthy diet?

If you’re ready to get started on either diet, but not sure how, check out a meal delivery service such as Trifecta, which offers all-organic ready to eat paleo and keto meal plans.

How to Start a Keto Diet: 5 Essential Steps for Beginners

Dirty Bulk vs. Clean Bulk: What is the Best Muscle Building Diet?