Vitamin B: Food Lists & Guide to the B Vitamins for Your Health

B vitamins include some of the most common micronutrient deficiencies in the country. Yet they are essential nutrients we all need to maintain good health. People in every stage of development - from growing babies to the elderly - require these key micronutrients to thrive.

Here's your guide that goes step by step through where to find each B vitamin, why they're so important and how to make sure you're getting enough.

There are actually 8 B vitamins including:

All of these micronutrients often work together to help the body in a variety of ways. They are important in many critical reactions at a cellular level, including our basic ability to generate energy we all need to function.

The brain especially loves and needs B vitamins. Our bodies actively pump them into our brain in order to maintain high enough levels for optimal functioning (1).

Each of the B vitamins independently contributes in its own unique way to supporting our health.

Most B vitamins are made by plants, and leafy greens are an especially nutrient rich source. An exception to this is vitamin B12, which is primarily found in animal and diary products. Vegan diets can be a risk factor for some B vitamin deficiencies.

The specific amount in each food depends on the B vitamin of interest.

Vitamin supplements are available for those who want to ensure they are getting all of the micronutrients they need. Supplements that contain all 8 of the B vitamins are referred to as B complex vitamins. These are almost always included in multivitamins.

Similar to vitamin C, all of the B vitamins are water soluble. Our body is able to get rid of extra water soluble vitamins consumed by eliminating it in our urine.

This means that it’s important to have a regular supply of the B vitamins in our diet.

Some studies show that between 10-30% of individuals living in the United States and Europe have B vitamin levels low enough to be considered deficient (2).

Certain populations are more at risk for developing dangerously deficiencies of these essential micronutrients.

Conditions at Risk for Vitamin B Deficiency:

Vitamin B Deficiency Symptoms Can Include

Each B vitamin has its own set of symptoms associated with it’s deficiency.

Thiamine is critical for the growth and development of cells (3).

Low levels of vitamin B1 can happen in people who don’t get enough in their diet and in people who have conditions that lead to problems absorbing the vitamin effectively.

Severe thiamine deficiency can lead to dangerous problems including Wernicke-Korsakoff Syndrome and beriberi.

Wernicke-Korsakoff Syndrome is a condition involving numbness and tingling in the extremities (peripheral neuropathy), unsteady gait, vision changes, and confusion and/or psychosis. This is a dangerous disease from which 10-15% of people do not survive and an estimated 25% of people require long term care.

In developed countries like the United States, thiamine deficiency extensive enough to  cause Wernicke-Korsakoff Syndrome is most commonly associated with severe alcohol abuse. However, it’s important to note that the disease can result from severe thiamine deficiency from any cause (3).

Beriberi is another condition caused by severe thiamine deficiency that involves numbness and tingling (peripheral neuropathy) and can also cause significant heart problems.

Conditions That Increase the Risk for Thiamine Deficiency

How Much Thiamine Do You Need

You don’t need to worry about getting too much thiamine from what you eat.  There hasn’t been any toxicity found from consuming thiamine in food or supplements (4) .

Riboflavin also helps the development and growth of cells and is important for the metabolism of a variety of compounds in the body including fats, amino acids and steroids.

Symptoms of Riboflavin Deficiency (aka: ariboflavinosis):

Conditions That Increase the Risk for Riboflavin Deficiency

How Much Riboflavin Do You Need?

In general, milk products, animal products and fortified foods such as cereals are all great sources of riboflavin.

Similar to many of the other B vitamins, niacin helps to support the fundamental function of cells as well as our genetic code. It’s critical for energy production and over 400 metabolic reactions that we depend on to function.

Furthermore, high doses of niacin can be helpful in treating high cholesterol by lowering the bad cholesterol (LDL) and elevating the high cholesterol (HDL). In theory, this could reduce the risk of other chronic diseases including heart disease and stroke.

However because of its numerous side effects, vitamin B3 is no longer recommended as a treatment for hypercholesterolemia as other medications have been shown to be safer for this indication (6).

Niacin deficiency is rare, and usually limited to malnourished and almost always impoverished populations that don’t have access to balanced foods.

The disease associated with severe niacin deficiency is called pellagra.

Like many of the vitamin deficiencies, pellagra can be treated with vitamin replacement, especially when discovered and addressed in it’s early stages (7).

Conditions That Increase the Risk for Niacin Deficiency

How Much Niacin Do You Need?

Niacin is abundant in many common foods, both animal and plant based alike.

You don’t have to worry about eating too much niacin in food. As described above, this vitamin is critical for countless processes. No toxic effects have been identified from getting too much in what we eat.

However many synthetic forms of B3 are available in medications and supplements. These can come in much higher doses than what we could ever consume in a day's worth of food.

While the recommended daily intake is 17mg, medications and supplements can boost that into the 1000’s.

Approximately 30-50mg of niacin can lead to a side effect called flush that involves redness throughout the body (primarily the face, chest and arms) and sometimes involves burning or itching. While flush isn’t in of itself dangerous, it is an uncomfortable experience that indicates an overload of niacin and the potential for other more severe adverse effects (6).

Other Potential Side Effects from Niacin:

Pantothenic acid is such an important vitamin because it is required to make an enzyme - called coenzyme A - that is needed for many processes critical to our survival. Similar to Niacin, vitamin B5 has been shown to lower cholesterol levels (8).

Because it’s found in so many food sources, deficiencies are extremely rare. It’s often only observed in extreme cases of malnutrition and therefore symptoms of deficiency are hard to isolate from other concomitant nutritional deficiencies.

How Much Pantothenic Acid Do You Need?

Similar to many of the other B vitamins, there’s never been shown a toxicity from eating too much pantothenic acid from dietary sources (9). 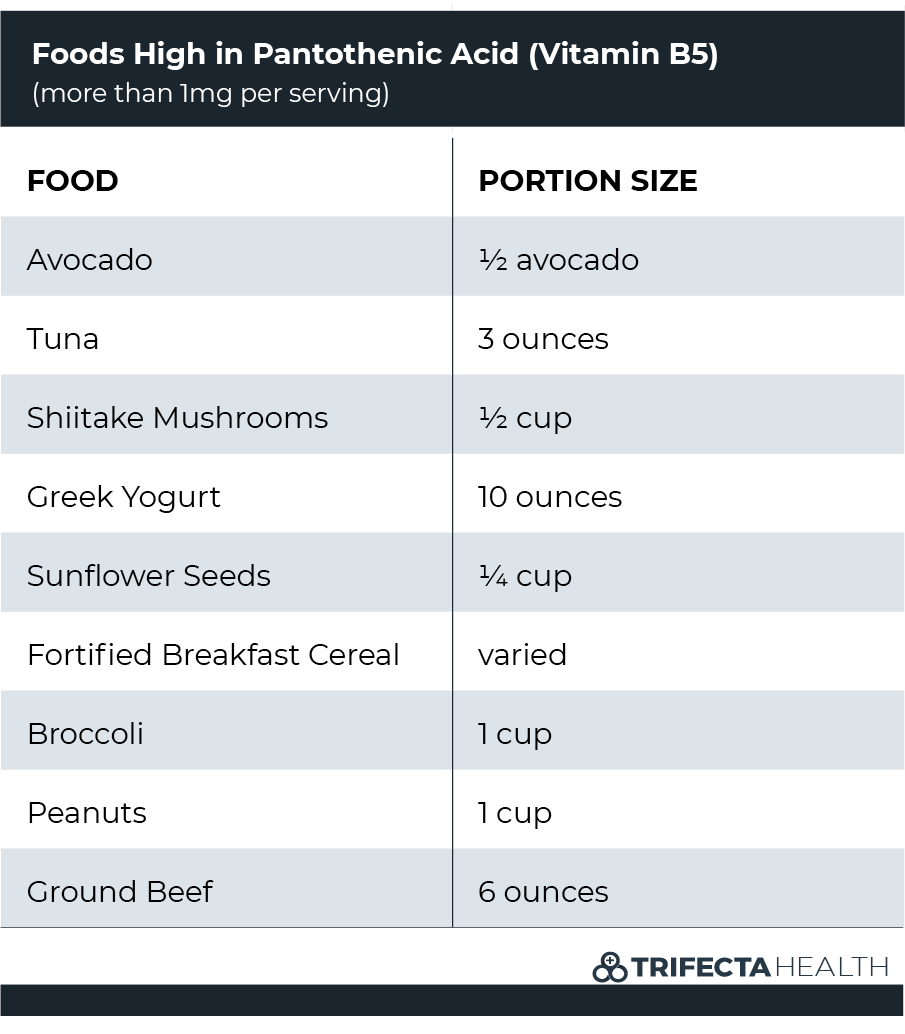 Pyridoxine is another vitamin key in proper metabolism, especially of proteins in the body.

Other Vitamin B6 Benefits

In theory,  pyridoxine can contribute to health in a variety of ways including offering protection for heart disease and stroke. While these haven’t yet been proven effects in well done studies, it is a known treatment of a type of anemia (low red blood cell count) called sideroblastic anemia.

Vitamin B6 can be especially beneficial to pregnant women, and it has been shown to help safely treat pregnancy induced nausea and vomiting (10).

Conditions That Increase the Risk for Thiamine Deficiency

How Much Pyridoxine Do You Need?

There isn’t any known risk of eating too much vitamin B6 (11).

Pyridoxine is plentiful in many vegetables, fruits, animal products and grains. 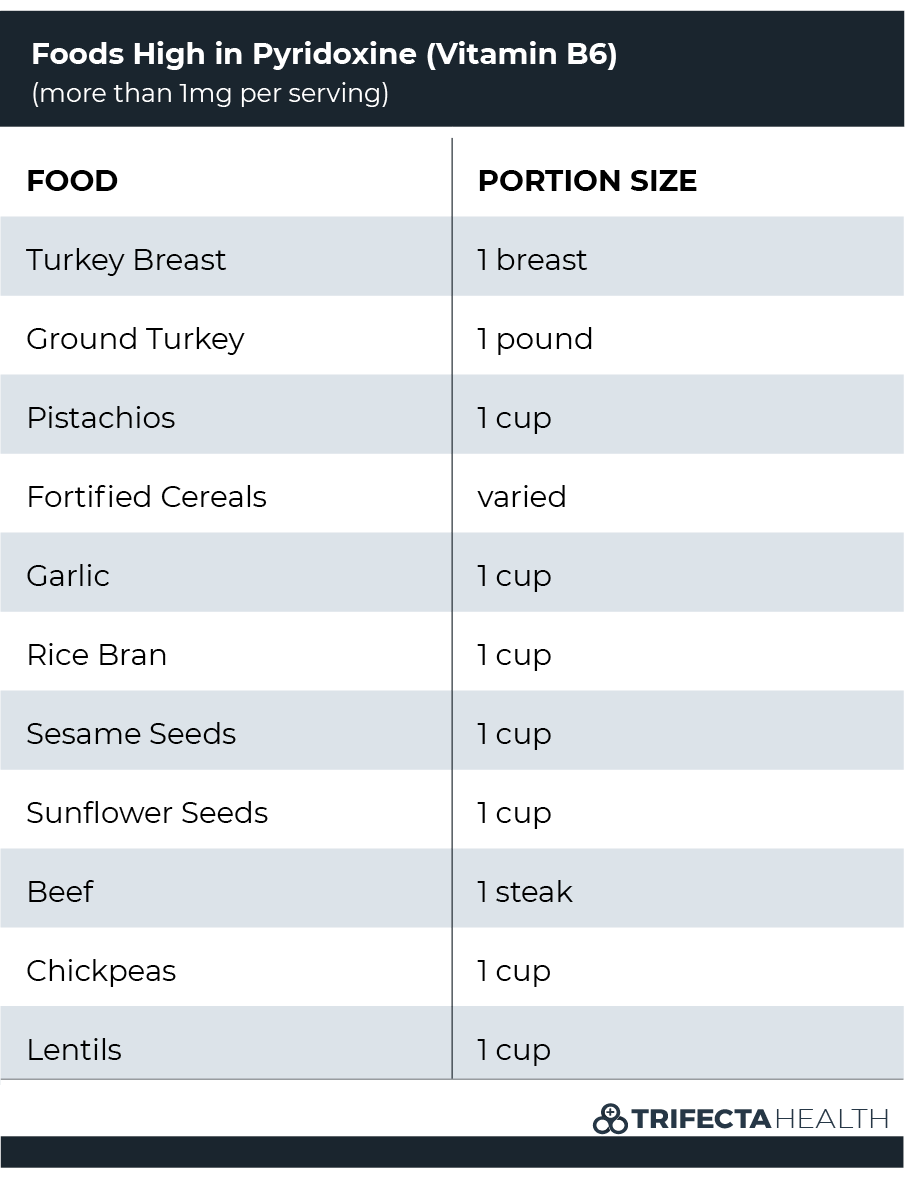 Like many of the other B vitamins, biotin is key in many important reactions in the body including for our metabolism, cell function, and the expression of our genetic code.

Because it’s present in so many foods, B7 deficiency is rare.

Conditions That Increase the Risk for Biotin Deficiency

While getting enough biotin is important, it isn’t shown that getting extra biotin past our nutritional requirements provides any further benefit to our health.

There isn’t any good evidence that any of the numerous biotin supplements to improve hair, skin and nails are effective (12).

There isn't shown to be any harm from eating too much biotin from food sources. 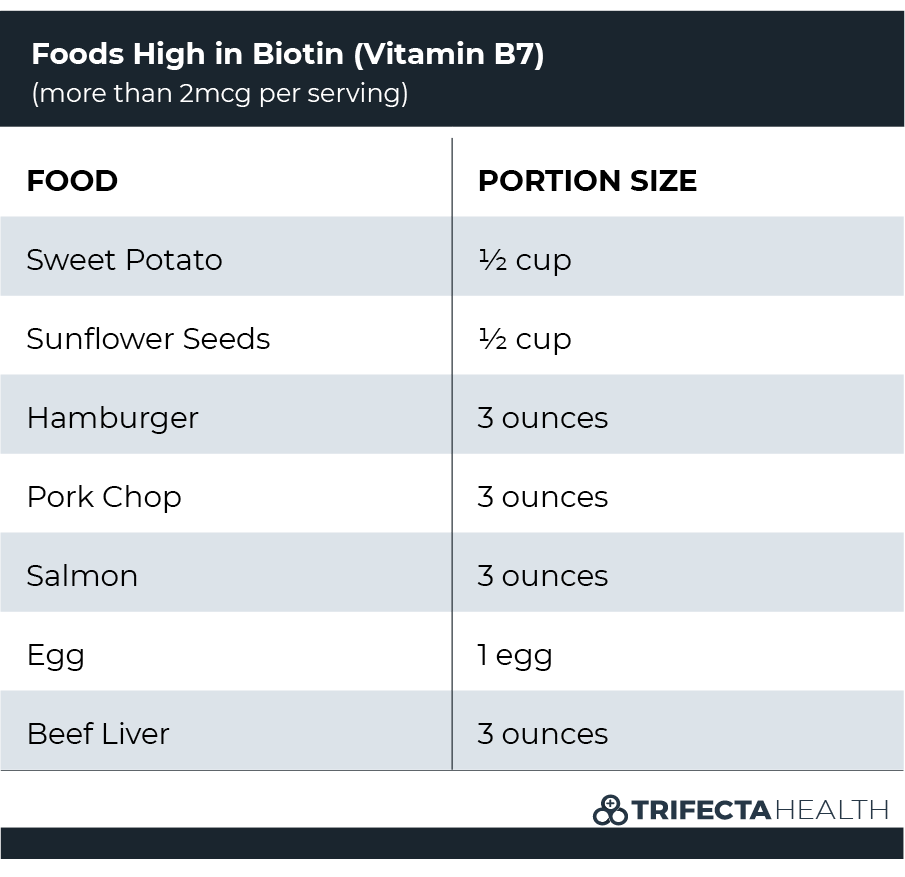 Folate is so important because it helps to create the substances that make up our DNA - called nucleic acids - among a variety of other critical functions for our health and metabolism.

Because of its role in growth and development, adequate folate is particularly important for babies during pregnancy - including the creation of their nervous system.

While folate is often the general term used for B9 in food and supplements, folic acid refers to the oxidized form found in most supplements and fortified foods.

While folate deficiency is relatively uncommon, it’s important for people who are at particularly high risk for deficiency to strongly consider supplementing their folate levels - especially pregnant women (13).

Conditions That Increase the Risk for Folate Deficiency

How Much Folate Do You Need?

There isn't any harm in getting too much folate from what you eat (13). 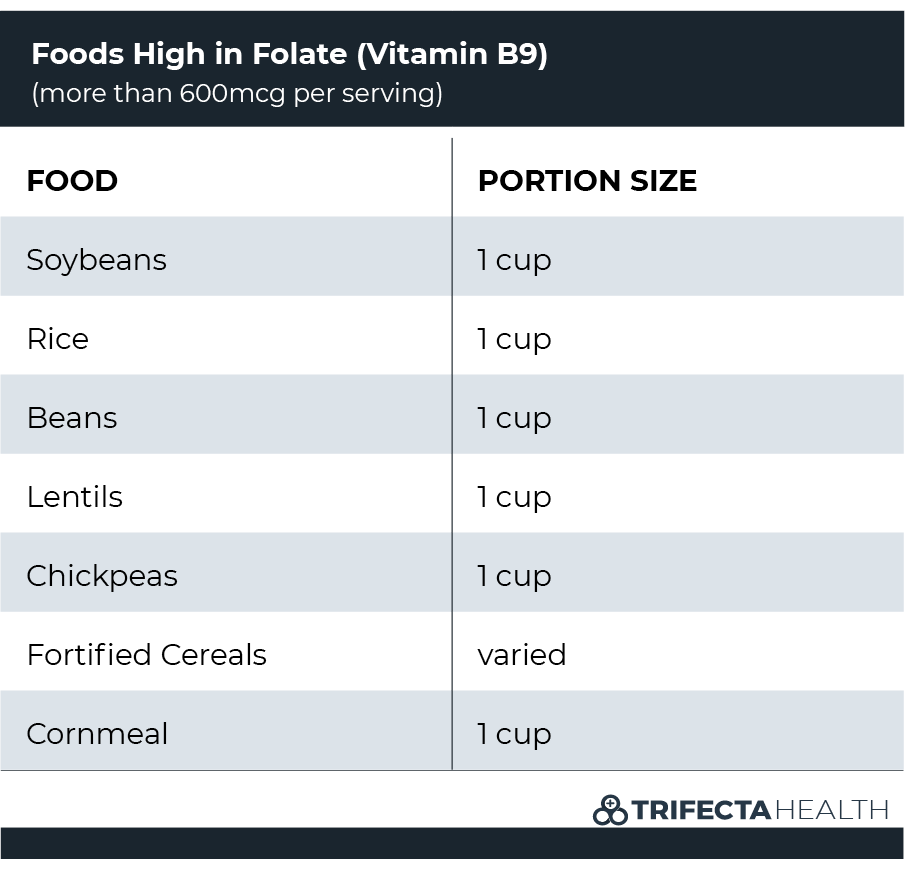 Similar to folate, vitamin B12 is important in a variety of critical ways including helping to make our DNA and red blood cells.

Cobalamin deficiency may be more common than many of us think. Some studies show that up to 20% of people over 50 years old  have borderline vitamin B12 levels and about 3% have significant deficiencies (14).

Symptoms of Vitamin B12 Deficiency

Conditions That Increase the Risk for Vitamin B12 Deficiency

Food sources for cobalamin are primarily meat, eggs and dairy. 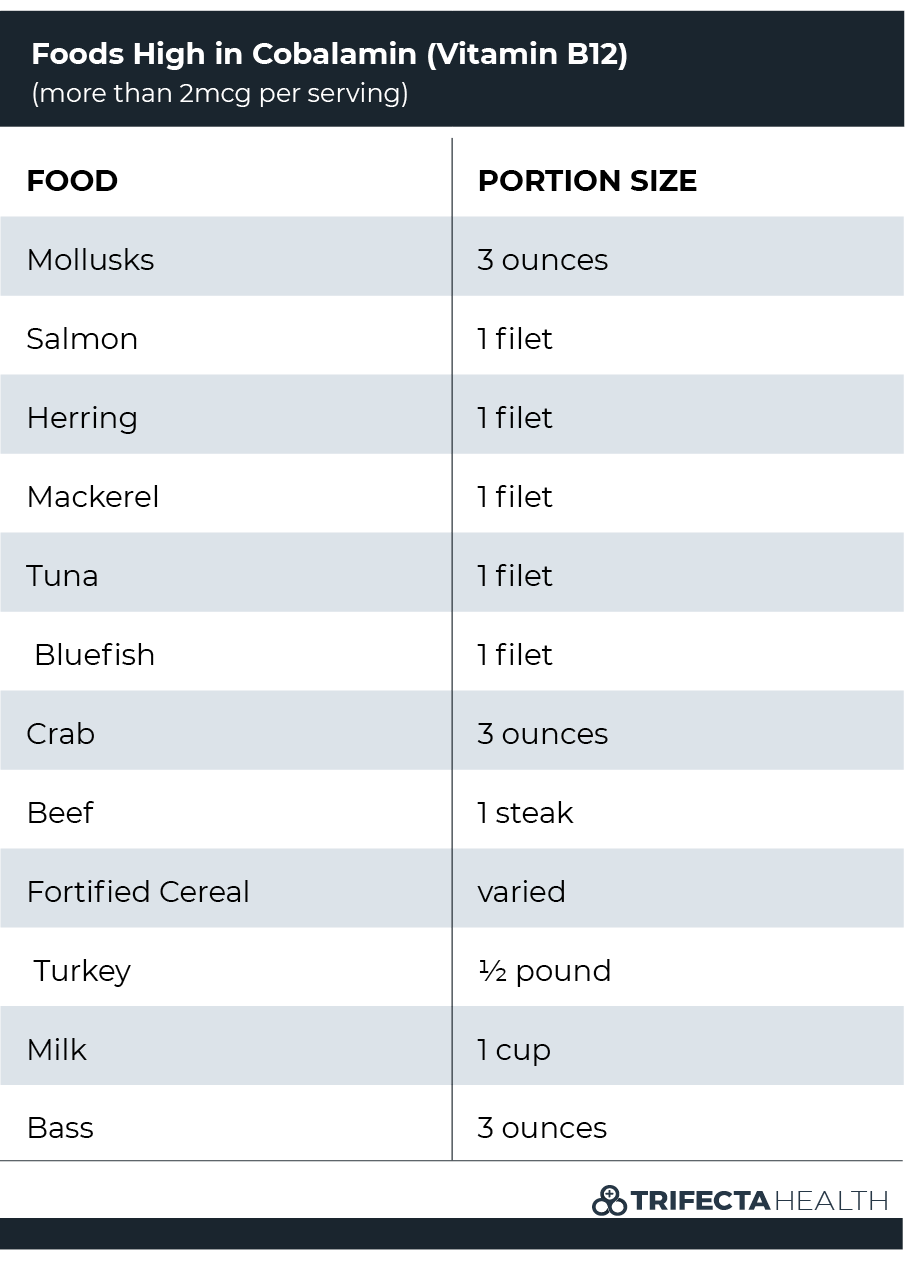 Vitamin E: Food List & 8 Ways It Can Affect Your Health

Vitamin C & Your Health: Food List & 7 Benefits to Your Body