Excruciating abdominal pain and intestines literally bursting open followed by surgery with extended hospital stays are just a few of the complications of  diverticulitis. This is an all too common condition that causes hundreds of thousands of people to be hospitalized each year.

Like so many of the major diseases that face our society today, the risk of diverticulitis can be significantly lowered by diet changes, weight loss, and increasing physical activity (1).

Heres all you need to know about what diverticulitis is and how you can help to prevent it from happening to you.

Diverticulosis is a condition that involves the development of small outpockets in the lining of your intestine, called diverticula. These most frequently form in the large intestine, also referred to as the colon.

Most people can’t tell they have diverticulosis.

Diverticulosis doesn’t usually cause people to suffer from any symptoms.

Sometimes it can cause painless rectal bleeding. Rarely it may cause mild abdominal discomfort, bloating or gas.

Diverticulitis is a common condition that causes hundreds of thousands of people to be hospitalized each year and costs over 2 billion in the United States annually. This disease that affects so many people also tends to recur. About  20% of people who get diverticulitis once will be affected by it again in the future (2).

Diverticulitis occurs when one or more of the diverticula becomes infected.

It is most often formally diagnosed by a CT scan. While it more frequently occurs in older individuals, it is becoming increasingly more common in younger adults. More recent research suggests that only 4% of people with diverticulosis end up developing diverticulitis. However because diverticulosis is so common, diverticulitis still seems to occur on a regular basis (3).

Symptoms of diverticulitis include:

How sick people feel can vary tremendously. Sometimes these symptoms are mild and can be treated at home. Others can become extremely ill and require hospitalization, especially if they have complications.

Up to 25% of people with diverticulitis develop some form of complication. Some of these can be life threatening and many require surgical interventions. The most common complications are described below.

This is a collection of pus in the infected diverticular pocket.

Diverticular perforation occurs when the colon wall bursts into the abdominal cavity.

Diverticulitis can cause a blockage in the intestines which prevents them from functioning properly.

Fistula formation is the development of an abnormal pathway between two body parts. This often requires surgical repair.

While it does seem there is some genetic component to developing diverticulitis, most of the risk factors listed below involve lifestyle choices we have the power to control (4, 5).

How to Treat Diverticulitis

While diverticulitis should be addressed at its core through dietary changes, exercise and weight loss,  acute diverticulitis may require more immediate medical attention.

Uncomplicated diverticulitis is most commonly treated with antibiotics and pain management.

Most people with uncomplicated diverticulitis can take antibiotics at home for 7-10 days without needing to be admitted to the hospital.

It’s ok for most people to continue eating solid food during this time. However, people who are sick enough to be admitted to the hospital are often kept on a liquid only diet or bowel rest until their symptoms begin to improve (6).

There is growing evidence that some people who are low risk with uncomplicated diverticulitis may not even need antibiotics. This isn’t yet as common of a trend in the United States. However, there are other countries who regularly avoid antibiotics in these low risk cases, and there is safety data to support his approach (7) .

While historically surgery was almost always performed in complicated diverticulitis, some cases improve with antibiotics and careful observation alone. 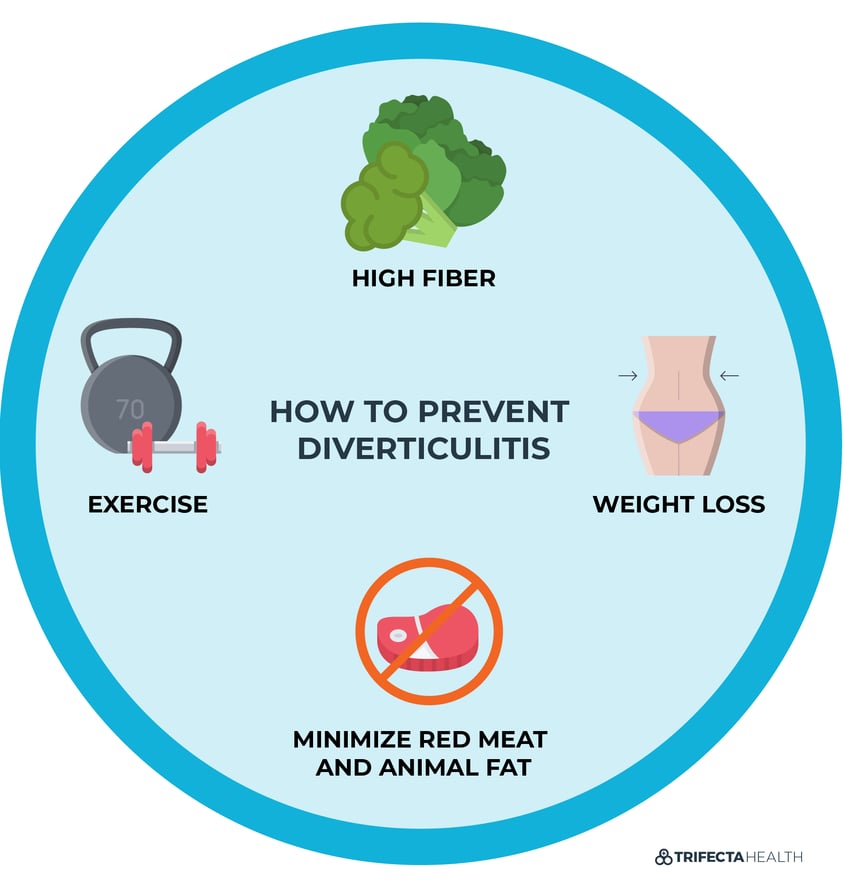 How to Prevent Diverticulitis

The cornerstone of preventing diverticulitis in the future should involve lifestyle modifications including weight loss, dietary modifications and increased physical activity.

Some people believe supplements help to treat diverticular disease. It’s important to always discuss any additional supplements of complementary and alternative medicine (CAM) treatments  with your doctor before starting them.

Because fiber seems to be so helpful for diverticular disease, it makes sense that fiber supplements are sometimes used as well. It’s recommended to start slowly with the supplements as taking too much fiber when your body isn’t used to it can also lead to worsening abdominal discomfort (6).

Probiotics are live bacteria that naturally occur in our intestines. You can take them in a variety of formulations such as in a pill or in some foods like yogurt. Some people believe that probiotics can help gastrointestinal problems, including diverticular disease.

However studies to date do not support that they are an effective treatment for diverticulitis (8). With that being said, many people still feel like they improve their symptoms. Because there hasn’t been much research devoted to probiotics for diverticulitis, it’s possible that future studies may determine that they are indeed helpful.

Bottom Line: There isn’t good evidence that probiotics are an effective treatment for diverticulitis. However, probiotics are also not likely to be dangerous and may be worth a try to improve gut health.

A high fiber diet has been shown to help diverticular disease. This includes fiber rich fruits, vegetables, beans, and whole grains. It’s recommended to eat at least 14 grams of fiber for every 1,000 calories you consume (9)

While in the past it was suspected that certain foods like nuts or popcorn specifically contributed to exacerbating diverticulitis, that is no longer thought to be true. There is some thought that avoiding red meat and food with high animal fat can help contribute to bowel health (10).

It’s important to avoid foods that interfere with your weight loss goals. Being overweight or obese  is a known risk factor for diverticulitis - along with many other medical problems including heart disease, hypertension, diabetes, high cholesterol and stroke.

Losing weight and/or maintaining your ideal weight is the goal for minimizing your risk of diverticulitis, along with so many other chronic disease (11).

6 Ways to Build a Strong Immune System and Fight Infections