Brown Rice vs White Rice: Which One is Better?

Rice is a staple food in many healthy diets because of its simple ingredients and quality source of carbohydrates, but there is more than one type to consider.

Brown rice is celebrated as a healthy whole grain choice, whereas white rice is often demonized as a processed, refined grain, that should be avoided. Considering both types often come from the same grain, are they truly that different?

Lets settle the brown rice vs white rice debate once and for all. Here are all the facts to consider when deciding which type of rice is best for your diet and your taste buds.

Difference Between Brown and White Rice

There are actually multiple types of brown rice and white rice. Both can come from short-grain, long-grain, Jasmine, and Basmati varieties.

Because many claim processed foods are “bad” for you and that whole grains are better than refined varieties, most will automatically assume brown rice has more benefits than white. The truth is rice itself is not a heavily processed food, to begin with, and the real differences between the two types might surprise you.

We put these two popular starches head to head to see how they stack up when it comes to the following: 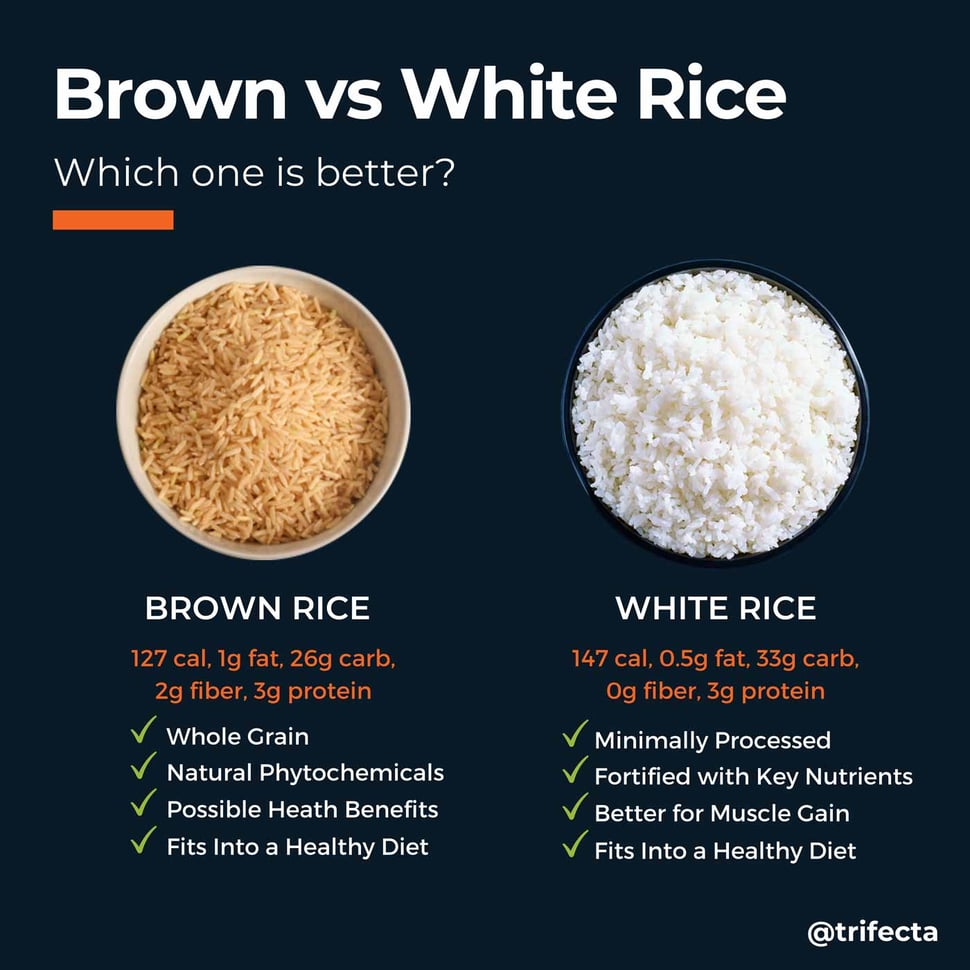 How is Rice Processed?

All rice goes through some level of processing in order to be edible. This is done through milling. And the main difference between white and brown is only one step of processing (1).

Brown rice is created when the outer hull of the grain is removed - this layer is hard and inedible. But the bran and germ layers remain intact with the grain, allowing brown rice to be considered "whole grain".

The next step of milling removes the bran layer, leaving only the soft interior we recognize as white rice, which is technically a "refined" product at this point.

Sometimes, the entire grain (hull intact) is parboiled prior to milling. This process involves soaking it in water and steaming it under intense pressure. Parboiling can help the kernel hold together better during milling, but can also push nutrients from the bran layer into the kernel - leaving more nutrition in the white, fluffy interior (2).

Neither white nor brown rice is considered heavily processed food. Both are naturally gluten-free and don't contain any added ingredients or preservatives.

The bran layer is often a key source of nutrition in several grains, leaving many to automatically assume brown rice has much more nutrients than white rice. But depending on how the grain is processed, the variety of the grain and the serving size you eat, the nutritional differences between the two may surprise you.

In addition, brown rice is a good source of the following:

Additionally, whole grain rice contains small amounts of riboflavin, Vitamins B6 and B12, iron, and zinc (3).

While there are differences between varieties, brown rice can provide small amounts of fiber, protein, and essential nutrients making it a decent source of quality carbohydrates.

There is also some debate around whether or not the phytic acid content of the bran layer in brown rice impacts the absorption of certain nutrients, like iron and zinc (4,5). While phytic acid is not a major concern for those who eat a balanced diet, it is an important consideration when comparing the nutrition between the two varieties since white rice has significantly less phytic acid.

Phytic acid is a substance found in certain plants that are thought to negatively impact mineral absorption (6).

Removing the outer layers of the grain eliminates some of the fiber and fat from the grain and leaves a soft fluffy interior - this allows for white rice to have more carbohydrates (aka sugar) than brown rice. But nutritionally they aren't that drastically different, especially if the white rice has been fortified and phytic acid content is considered.

What are the Health Benefits of Each Rice?

Whole grains, like brown rice, are associated with a whole host of health benefits (7,8).

Brown rice, on the other hand, is associated with more positive health benefits including better blood sugar control and reduced risk of diabetes when substituted in place of white rice (12). And another study suggested that swapping in brown rice promotes better heart health (13).

In addition, some research suggests that the bran layer of brown rice may be a source of powerful plant-based chemicals, called phytochemicals, that provide unique protective health benefits to the food, such as improved heart health and antioxidant effects (14).

In reality, there is no single food item that is going to make or break your health, but brown rice appears to be the clear winner on this one. If your diet consists of high amounts of rice, choosing brown rice more often may offer potential benefits. But if you’re enjoying rice as a part of an overall healthy diet, including white rice on occasion, is likely not going to do you any harm.

Which Rice is Best for Weight Loss?

Weight loss ultimately boils down to calorie control, not which type of grain you eat. But that being said, the foods you choose can make sticking to your diet feel easier sometimes - especially if they help manage hunger, energy, and mood. And as it turns out, rice intake, in general, may support weight loss when included as part of a nutrient-dense, calorie-controlled diet.

Some studies suggest that whole grain consumption is associated with lower body weights and better weight management due to their high fiber and protein content (15,16). Other studies looking at populations who consume high amounts of white rice suggest that white rice may have weight loss benefits as well (17,18,19).

It is entirely possible to have a terrible diet that includes rice and leads to weight gain. So if you enjoy rice, opt for the variety you like best and use portion control as well as a balanced approach to eating for weight loss, and you’ll get results.

Which Rice is Best for Building Muscle?

Similar to weight loss, caloric intake is the most important factor when it comes to gaining lean mass. However, quality carbohydrates from foods like rice can support bulking efforts a few different ways.

White rice has a small advantage with its lower glycemic index and higher carb content, making it slightly better for pre and post-workout meals to promote quick access to nutrients for energy and recovery. But the difference between the two is minor, and for most people, brown rice works just as well.

Many bodybuilders and athletes prefer white rice because of its higher sugar content and faster absorption to support training and muscle growth, but there isn't any research to suggest brown rice is inferior for these purposes. Gaining lean mass is more strongly influenced by total intake and training.

Here is how each option stacked up:

It can be easy to look at one or two studies on a food and make assumptions, but nutrition is a little more complicated than that. Most of the research we have on rice, in general, is based on association studies. In other words, those who ate more brown or white rice tended to have a certain characteristic or outcome compared to those who didn’t. And these types of studies don't explain the root cause of the outcome well or prove anything in the end.

So based on the facts we have we can say that brown rice may have more health benefits due to its phytochemical composition, but when it comes to overall nutrition and fitness, it probably doesn't matter much what type of grain you eat as long as you pay attention to your diet overall.

Want to include brown or white rice as a part of your weekly meal prep? Cut down on cooking and crush your weekly macros with Trifecta meal prep ingredients. All you need to do is portion, season, and enjoy!

Dirty Bulk vs. Clean Bulk: What is the Best Muscle Building Diet?

How Much Protein Do I Need to Build Muscle?

How to Build Muscle and Lose Fat at the Same Time